D.W. Harkness was struck by an automobile while crossing Main Street at Orchard. He suffered a deep cut under his right eye. There was general alarm, for Harkness in his 20 odd years as cashier of the bank and founder of the fire company has many friends.

The completion of the Catskill Aqueduct water system will be commemorated by a three day’s celebration at City Hall Park in New York City.

Edward Quirk, 46, died of pulmonary tuberculosis at the home of his sister, Mrs. Frank Early, on Main Street.

An innovation at the fall grand opening of Berger’s Big Department Store in Peekskill will be the presence of living models who will display the newest styles, showing the figures for which they are best adapted. 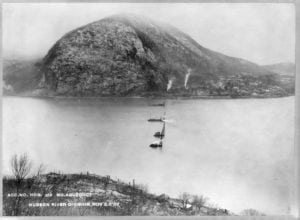 Scows drill borings for the Catskill Aqueduct to cross the Hudson River. The scene was photographed in 1907 on Breakneck Ridge looking toward Storm King. It would take another decade for the aqueduct to reach New York City. (Library of Congress)

Miss Judith Verplank, a graduate of Columbia University, will give one of her delightful talks at St. Mary’s. It is entitled “Why the Germans Want Peace Now.”

There will be a patriotic minstrel show at Loretto Hall on Thanksgiving Eve.

While Thomas Impel was cutting bananas from the stalk at his store on Main Street, he noticed something clinging to the fruit. With the aid of two sticks, he removed what proved to be a fair-sized tarantula.

Neighbors saved the home of Mr. Palumbo on Church Street after his son started a bonfire in a hallway.

Of the 34 graduates of the Haldane Class of 1942, eight are attending college and 23 have found jobs, including 10 at factories, four in retail stores and three as hospital attendants.

The Haldane Central School was emptied and the students escorted home in 14 minutes during an air-raid drill.

The enemy airplane lookout post in Garrison, which has been operating 24 hours a day since Dec. 8, 1941, has about 100 volunteer observers.

New Hudson Theatre on Main Street will present a weekend matinee in which the price of admission is a piece of scrap metal for the war effort.

John Patrick Arthur, 22, of New Haven, Connecticut, who killed George Whidby near Garrison on June 1, was sentenced to 25 years to life at Sing Sing.

William H. Osborn, the president of the Hudson River Conservation Society, wrote Central Hudson to congratulate the company on its decision to abandon Breakneck Ridge as a site for a hydroelectric plant.

Thirteen Cold Spring residents traveled to Manhattan for a rally organized by Citizens for Educational Freedom to oppose an amendment added to the state constitution in 1894 that bans state aid to religious schools. 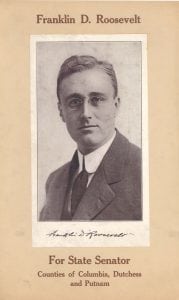 Franklin Roosevelt won a seat in the state Senate in 1910 at age 28.

Fire destroyed a three-story barn, and the new truck parked inside it, at the Gordon Todd property on Lane Gate Road.

New York State had purchased the 29-acre Little Stony Point more than two months earlier for $225,000 but kept the sale secret, according to Philipstown Supervisor Jeremiah Downey. Georgia-Pacific had planned to turn the site into a wallboard plant before Gov. Nelson Rockefeller stepped in. Local officials complained the governor had cost the area thousands of dollars in tax revenue.

Ronald Restko, 49, who owned Restko Collision Center on Route 9, died when the Jeep he was driving went off the road near Perk’s Plaza and struck a utility pole.

Mario Salvadori, a structural engineer who lives on East Mountain Road, discussed his latest book, Why Buildings Fall Down, a follow-up to his 1980 book Why Buildings Stand Up, at Salmagundi Books in Cold Spring. Joanne Russell, a former Philipstown resident, also had a signing for her children’s book, Ralphie the Roach, which she co-authored with her best friend, supermodel Paulina Porizkova.

Barbara Scuccimarra announced her candidacy for the Town Board. She said she would fight overdevelopment and advocate open and transparent government.

Cardinal Edward Egan, the archbishop of New York, visited Our Lady of Loretto in celebration of the 100th anniversary of the church on Fair Street.