U14 Arsenal Tie with Washingtonville

The Boys U14 Arsenal hosted the undefeated Washingtonville Warriors on Sunday. Entering the game, the division-leading Washingtonville had outscored their previous five opponents 35-5.

Philipstown started the game strong and was able to put a goal on the scoreboard when Philipstown’s Ryan Eng-Wong received a quick throw-in from Rowen Kuzminski. Eng-Wong beat his defender down the wing and put one past the Warriors’ keeper to take an early 1-0 lead.

In response, Washingtonville brought the ball down, took a strong shot and an unlucky Philipstown handball in the penalty box resulted in a red card and penalty kick against the Arsenal team. The Warriors capitalized on the penalty kick to tie the game, the Arsenal player had to leave the game and Phlipstown now had to face Washingtonville a man down for the remaining three quarters of the game.

Undaunted, Philipstown came back and scored less than two minutes later when Colin August won the ball and sent an excellent leading pass to teammate Eng-Wong. Eng-Wong took a touch around his defender again and sank one in the back of the net to bring the score to Philipstown 2, Washingtonville 1.

Late in the first half, Evan Maasik brought the ball down the wing, crossed to Eng-Wong who took a shot on goal. The excellent Warriors keeper made the save but Eng-Wong was relentless on the attack and following up the rebound, took a perfectly placed shot on the open goal for the hat trick, bringing the score at the half to Philipstown 3, Washingtonville 1.

In the second half Washingtonville settled in and took good advantage of their extra player. The Warriors scored at the seven-minute mark and again at fourteen minutes in. Arsenal pulled into the lead again when Eng-Wong dribbled through the defense on the right wing and crossed to teammate, Evan Maasik. Maasik chipped the ball over the keeper’s head to go ahead for Philipstown, 4-3. Washingtonville kept the pressure on and was able to tie the game near the end of regulation.

A final push from Arsenal wasn’t enough and Philipstown had to settle for the 4-4 tie but the Gunners’ coaches and parents were proud of their players for playing with heart in the face of adversity against a formidable opponent.

The Girls U10 Hawks hosted the Beekman Lightning at Philipstown Park on a warm and sunny Fall day. The Hawks started out strong, battling the Lightning in the middle of the field. Equal play occurred in both offensive ends, making the game a thriller to watch.

After a breakaway at mid-field, Samantha Thomas dribbled the ball into the Lightning’s defensive end. The quick footwork of the Lightning defender was no match for Thomas’s speed and determination. She kicked the ball past the defender, then rushed the Lightning goalkeeper for a strong shot on goal. Thomas’s goal made the Hawks play with more intensity, only to have that intensity end quickly, when the Lightning answered back with two quick goals.

Soon after, a penalty kick was awarded to the Lightning. Hawks’ goalkeeper, Ava Vasta, did everything in her power to block the goal, but the shot was perfectly placed in the left corner, slightly out of Vasta’s diving reach. The Lightning won, 3-1. This is the first loss for the Hawks this season.

On yet another unseasonably warm day, the Girls U11 Phoenix battled the Croton Force at home but came up short. The Force came out with an aggressive formation, leaving only two defenders back, and it was all up to the stalwart defensive line of Kira Drury, Josephine Foley-Hedlund, Laurel Sassano, and Amelia Alayon’s defensive midfield to hold back the tide with Sophie Tomlins backing them up at keeper.

After a couple of quick goals, the Phoenix settled down and moved some good passes up through the Force, whose tendency to crash the offensive end resulted in the Phoenix creating a number of breakaways. Sofia Rasic, Ada Caccamise, Lyla Chandler and Morgan Murphy were able to receive the ball several times with only two defenders in between them and the Force’s goal.

In one flurry, Murphy, Rasic, and Caccamise were all fighting for the ball within yards of the goal line, but eventually the Force were able to make a clear. Zohra Kapoor and Dylan Ambrose were also able to connect with Murphy on a number of nice passes to the front, but the athleticism and ball control of the Force cut short any breakaways.

In all, it was a hard-fought game against an unrelenting opponent, resulting in a tough, but well-played 6-0 loss, from which the Phoenix will look to rebound On Oct. 29 against the traditionally tough Cortlandt Heros.

Vikings vs. Gladiators Battle Ends in a Draw

The Boys’ U9 Vikings visited the Wappingers Gladiators in an exciting match whose score flip-flopped until the final whistle sounded with a 2-2 draw. The Gladiators struck first and the Vikings started the second half down 0-1. But a fast break by Vikings forward Parker Larsen leveled the match after he sent the ball beyond the outstretched arms of the Gladiators’ goalie. 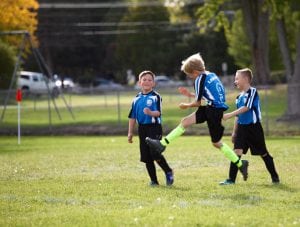 Vikings’ goalie Patrick Shields stopped multiple attempts, but the Gladiators managed to sneak in another goal to re-take the lead. The dogged Vikings defense, led by efforts from Joey Smith, Joseph DeMarco and Rhys Williams, kept the Gladiators at bay. Receiving a ball cleared by the Vikings defense, Parker Larsen passed to Elias Moran who shot and scored to tie the game.

It was a hard fought day for Team Storm but again their true character showed through despite a loss. On a beautiful sunny day, they played the Yorktown Heights Fury who started out fast and strong from the start. Team Storm displayed great sportmanship, endurance, and strength as a team. They hustled the entire game and made some great plays.

The Storm fell short of scoring, but they had a few great close misses and almost a few breakaways. Their team-first mentality shined as each player stepped it up a notch when some players were injured. Overall, Team Storm continued to progress and kept a positive attitude. Despite losing in the match they played with joy.

The offense, led by Connor Keegan, Oliver Sanders, Marco Dillello, Lenny Wolfe, Alex Gaugler, and Gavin Mahoney gelled well together, and made some creative and exciting plays. The defense led by Griffin Luca, Lincoln Wayland, and Chris Kordaris made some choice stops. Again Theo Saks and Jack Ferreira as goalkeepers were terrific and saved some impressive shots.

Yet in spite of the selfless saves by defensive players and the outstanding saves of star goalie George Stubbs, Force yielded to Cornwall in a 5-3 final.