Election signs emerged as a political issue this past week after a national newsmagazine claimed a candidate’s campaign logo violated its trademark and a bipartisan chorus decried the theft of placards from Highlands yards.

Tim Greco, the Republican candidate for one of two open seats on the Philipstown Town Board, ran afoul of Time Inc., which warned that the appearance of his slogan — TIME for a Change — improperly replicated the TIME magazine title, including its deep red lettering.

Greco is challenging Democratic incumbents John Van Tassel and Mike Leonard for a four-year term on the board.

The minister and former Putnam County News and Recorder reporter agreed to alter his campaign materials, although he predicted that, less than two weeks before the Nov. 7 election, his supporters likely would not change their lawn signs. In addition to signs, his logo appeared on his Facebook campaign page and other materials.

The dispute began on Tuesday (Oct. 24), when Greco received a letter from a Time Inc. lawyer demanding that he “immediately cease” using TIME for a Change because it employs “the same style, serif typeface, font, and red color” as TIME and “suggests an affiliation or endorsement, neither of which was authorized.

“As an independent source of news and information, we do not allow the TIME name to be used to support political candidates or causes,” wrote Jennifer Chung, an assistant general counsel with the company. 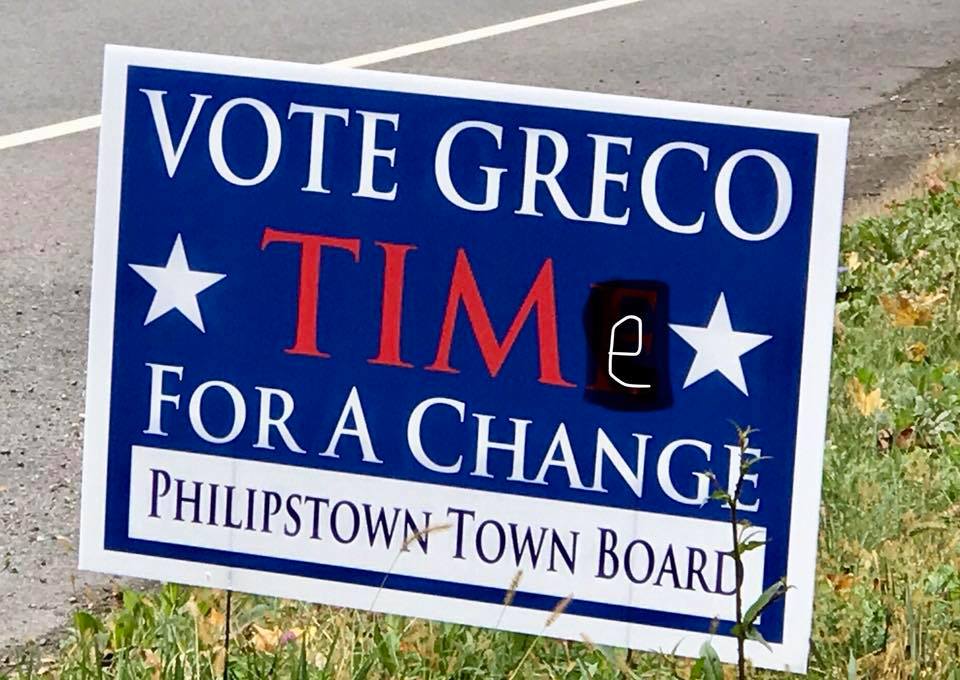 Greco, who told The Current he believes an unknown political adversary alerted Time Inc., initially had a different color scheme for his logo but changed it to red, white and blue. He told Chung this in an email, after she said that “it seems a deliberate decision was made to transition to a red TIME,” thereby “suggesting an intention to trade off the TIME magazine brand and fame.”

She directed Greco to remove all postings and photos that showed a red TIME, and to “cover the E” on signs, as Greco had proposed.

Greco subsequently called Time Inc.’s objections “petty” and told Chung, “I’m just running for a local election. It’s sad that the opposition had to contact you.” He likewise said he found it “very sad to know that such a great American magazine like TIME would take such efforts to place themselves squarely in the middle of a local election.” (Chung did not respond to inquiries about how the company learned of the signs.)

Greco told The Current that the font in his slogan was recommended to him by an online advertising firm.

On his campaign website, the candidate suggested the conflict would boost his chances. “How low will the opposition go? Read it and roll!” he told supporters. “Vote Greco. TIMe for a change. This is campaign gold!”

The greatest yard-sign study ever conducted — a 2016 effort that involved six researchers from Columbia University who worked with four campaigns in New York, Pennsylvania and Virginia — found that yard signs placed in people’s lawns have essentially zero effect while those placed in public places may raise a candidate’s share of the vote by about 1 percentage point. That might matter in a very tight race — but only about 1 in 50 are decided by that margin, according to one estimate.

Notably, the researchers found that signs are not as effective when they include references to a political party or ideology.

A few hours after the exchanges with Time Inc., the candidate’s Facebook page showed a yard sign in which the red “E” had been replaced by a white “e.” It also featured a photo of Greco, stamped with “This candidate from Philipstown is not endorsed by TIME.”

Campaign yard signs commonly get stolen or defaced all over the country, and the Highlands has not proven the exception. Greco said that at least 11 of his signs, valued at about $15 each, disappeared, along with those for Putnam County Sheriff Don Smith, a Republican running for re-election.

“Could it be that the Democrats are actually scared that they may lose a seat this year, that they have to resort to stealing?” he asked online. He said he had called law enforcement authorities, who assured him they would keep an eye out for pilferers.

Cold Spring Police Officer-in-Charge Larry Burke said on Oct. 26 that the department had received eight complaints of various campaigns’ signs being taken or knocked down. The Putnam County Sheriff’s Office said it had not received any formal complaints.

On the other side of the aisle, a half dozen residents, mostly from Cold Spring, said their signs for the Democratic candidate for Putnam County sheriff, Robert Langley Jr., were stolen between Oct. 20 to 22.

A row of signs on Route 9D near the Garrison School. A few days after this photo was taken, the Greco sign disappeared.

On Oct. 24, Langley said he condemned the theft of any signs. “I ask everyone to refrain from tampering with the signs of any candidate, on public or private land,” that latter of which involves trespassing, he said. “Political signs are free speech, and we need to respect our neighbors’ rights to express their support of any candidate.”

Langley did not respond to questions about the number of signs that had been stolen, their value, or whether any signs had been taken elsewhere in Putnam. 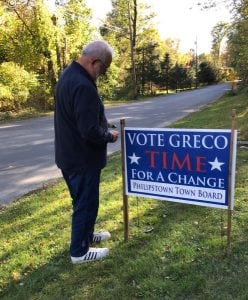 In Beacon, meanwhile, the Republican candidate to represent Ward 3 on the City Council, Andrew Gauzza, complained on Facebook on Oct. 20 that his signs were being stolen from front yards.

“I am extremely diligent to ask people if I can put signs outside their house and even ask where I can put them,” wrote Gauzza, a college student. “It is troubling that I spent $400 of my own money to purchase signs, and they keep getting taken…. I find this a troubling sign of the times. Too much hate.”