If the sight of a large orange snake crawling along a garage door makes you think you’ve had one too many, what’s inside will give you the opportunity. 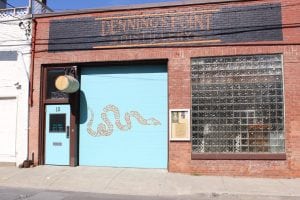 Denning’s Point Distillery, with its distinctive snake (Photo by A. Rooney)

The operation celebrated its third anniversary on Labor Day, and each Friday, Saturday and Sunday open its doors for tastings. Founders and partners Karl Johnson and Susan Keramedjian lead tours on Saturday afternoons.

The distillery came about after the passage in 2014 of the Craft New York Act, which offered financial incentives and other benefits to distilleries located on a farm, or where the liquor is made primarily from farm and food products.

The act piqued the interest of Johnson, who grew up on a 6,000-acre farm in Minnesota and, after studying chemical engineering (his first job was developing rocket fuel) had been a distiller for 25 years. 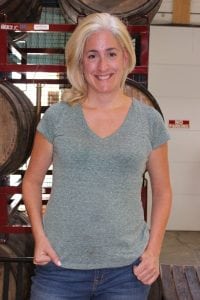 Susan Keramedjian (Photo by A. Rooney)

The couple began by looking at farms but realized how difficult it would be to entice customers to an isolated location. While scouting Beacon, they found the perfect spot, a former auto garage.

“The city of Beacon was incredibly supportive, even fast-tracked it,” says Keramedjian, whose background is in corporate marketing and design.

The state program requires distilleries to buy 75 percent of their grains from New York farmers; Keramedjian says Denning’s Point sources nearly everything in its products, except for the botanicals, from within the state. 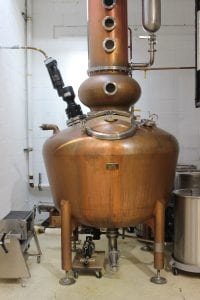 The 250-gallon, custom-made still (Photo by A. Rooney)

“We get our malted barley — 16,000 pounds each week — mostly from around 50 miles from here,” she says. “We mill the grain using mainly equipment reclaimed from other industry uses. We’re into bootstrapping and try not to buy new.”

Each of the spirits and label designs have connections to the history and agricultural abundance of the Hudson Valley, she says. For example, the sash-like splash of blue across the Viskill Vodka label was inspired by the sashes worn by Army officers once stationed nearby. Great 9 was the name of the original patent for the Dutchess County land grant (and there are nine botanicals in the recipe). 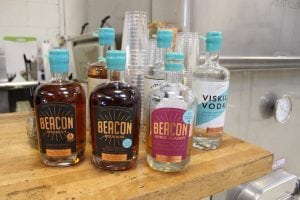 Some of the distillery’s local products. (Photo by A. Rooney)

The distillery has been named the best in the Hudson Valley for three years running by Hudson Valley Magazine, not insignificant as there are about 15 distilleries in the region. It also has won three silver awards at the San Francisco World Spirits Awards — for its bourbon, gin and Maid of the Mountain, a wheat-based spirit infused with wild herbs and honey.

During a tour, Keramedjian describes the distillation process. A homemade “relay box” allows the process to be controlled from an iPhone, she says.

“The grains are milled in a roller mill reclaimed from a horse farm,” she says. “It is mixed with hot water and barley malt, then mashed, turning into sort of a gelatinous oatmeal.” After cooking the mash, the contents are cooled and the couple’s proprietary yeast is added. It is then pumped into fermenting tanks, where it remains for about five days.

There are many explanations of how the word proof originated to describe the potency of alcohol, but according to lore, farmers who made whiskey often watered down their product. Suspicious buyers came up with a test in which the whiskey was mixed with gunpowder and lit. If the gunpowder exploded, the liquor had no water in it and it was “proofed.” Today, in the U.S., divide the proof by half to get the percentage of alcohol in the bottle. “We have to be very, very, accurate,” Keramedjian says.

After fermentation, the mash is pumped to a 250-gallon, custom-made still. It all then goes into a blending tank, and an app calculates how many pounds of water are needed to bring it, for example, from 115 proof to 110 proof.

The barrels are made from charred American oak by a cooperage in the Adirondacks. They’re filled with water first, which gets the wood to swell. Once filled, they are aged for years in a Newburgh warehouse.

“Fluctuation in temperature draws spirits in and out of the wood, which is what creates the flavors,” Keramedjian explains. “When the time comes, barrels are returned to the distillery for bottling, which is done by hand. The bottles are corked, given tear-tapes and labels and go inside case boxes, which then go out on pallets,” with some reserved for the tasting room and distillery sales. 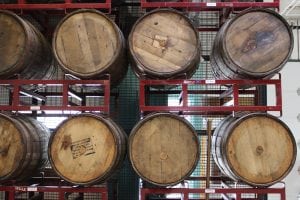 The distillery barrels are made from charred American oak. (Photo by A. Rooney)

Denning’s Point produces about 5,000 cases annually, she says, which are distributed to New York, Connecticut, Massachusetts, Maryland and Georgia, as well as Washington, D.C. “With bills to pay while sitting in barrels, unaged spirits pay the bills, while the others age,” Keramedjian explains. “Anything with color is aged in a barrel.”

The distillery also hosts live music. On Second Saturday, from 4 to 7 p.m., it opens the doors for a Bourbon ‘n Blues Open Jam Session for any musician who wants to use its backline of Mapex drums, Zildjian cymbals, Hammond organ, Peavey and Fender amps — plus free popcorn. In addition, they’ve hosted films for Story Screen, bachelor/bachelorette parties, charity events and a few weddings. On Nov. 4, it will host a chili festival. “Just turn up with your crockpot three-quarters full,” says Keramedjian.