The Beacon City Council is expected to hold a public hearing before the end of the year on proposed changes to the Main Street and Fishkill Creek zoning districts.

Pushed by council member Lee Kyriacou as a vehicle for reining in incompatible development, the council pledged in September to complete a nearly parcel-by-parcel review of the zoning laws for the city’s busiest development corridors while a building moratorium, set to run until March, is in effect.

A three-hour planning session on Oct. 23 provided some details on the changes likely to be proposed. Draft revised codes would establish a single zoning district for all of Main Street while addressing building-height restrictions, design standards and better ensuring that development projects don’t adversely affect historical assets and protected viewsheds.

Along Fishkill Creek, proposed changes would give the City Council authority to review conceptual plans for developments while lowering density allowances on some parcels and heightening consistency requirements with the city’s greenway trail master plan. The council also discussed a requirement for residential projects to include commercial uses as part of their plans.

At the board’s request, planning consultant John Clarke is re-drafting zoning language for Main Street and the creekside district for its review while a date is set for the public hearing.

In other business, the City Council approved a minor revision on Oct. 16 to its six-month building moratorium, adding an exemption for existing industrial and manufacturing buildings. 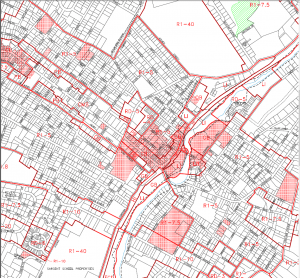 Detail from the Beacon zoning map.

The amendment gives Tim Dexter, the city’s building inspector, the discretion to allow the reuse of non-residential buildings for industrial or manufacturing uses — where such use does not increase the building’s footprint or square footage — to proceed while the moratorium is in effect.

The council also approved amendments to the city charter to give elected officials the option of receiving individual or family health insurance benefits through the city’s employee plan. Earlier this year, a charter review committee recommended that council members and the mayor receive a stipend instead of being offered health coverage.

As of Jan. 1, the city will pay 80 percent of individual health insurance costs — the same rate that Beacon governmental department heads receive — with the council member or mayor paying the remainder. Council members and the mayor may secure family coverage through the city’s plan but will be responsible for any cost above individual coverage.

Elected officials who don’t opt for health insurance will receive a payment of $2,500. The six council members each earn $9,000 annually, while the mayor’s salary is $25,000.

2 thoughts on “Zoning Changes Being Considered in Beacon”