Mary Supino is one of those lucky people who knew what they wanted to do by the age of 12, and, decades later, is still doing it.

In fact, she gave up on retirement to return to what she knows best: flowers. 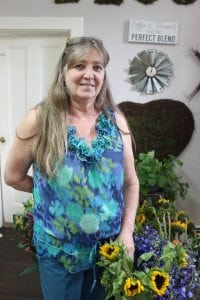 Mary Supino (Photo by A. Rooney)

Five months ago, Supino opened Cold Spring Florist at 159 Main St., and she’s never been happier, she says, filling a void that had existed on Main Street for a retail floral business since Carolyn’s Flower Shoppe closed in 2016.

While growing up in Shrub Oak, Supino enrolled in a vocational flower arranging course in high school that included field trips to wholesalers and greenhouses as well as to the countryside to pick wildflowers for drying. When a teacher recommended Supino to his wife, who ran a flower shop in Bedford, she eagerly took the job.

When the teacher and his wife later sold the business, Supino stayed for two years as a manager for the new owner. Although only 21, she felt ready to venture out on her own. She ran her first store, Mer-Made (a play on her childhood nickname, Mer) until the birth of her second child, but re-opened it when he reached middle school. Her children and grandchildren, she says, “were raised with the flowers.” 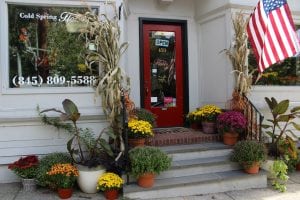 Eight years ago, Supino closed the shop and retired, thinking she was done, until, earlier this year, she decided to jump back in.

“I never wanted to come here while Carolyn was here, of course,” she says. “But I was bored not being creative. And you know what? Opening here has been the best thing I’ve ever done. What great people there are here. I like small towns.”

Supino says that while her previous shop was “a little bit more Victorian,” her current one is more “country.” This is reflected in flower sales, with sunflowers and wildflowers being popular, along with succulents and plants. She creates bouquets for all occasions. 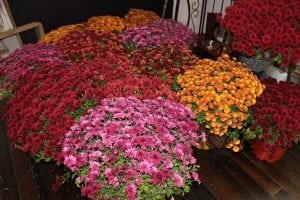 Mums at Cold Spring Florist. (Photo by A. Rooney)

In the spring, she’ll prepare corsages and boutonnières for the proms — customers email her photos of the dresses and she tries to match the color — and she’s figuring out how best to reflect Cold Spring’s enthusiasm for Halloween.

During the coming holiday season she will have wreaths made of bicycle tires; now the shop has whiskey barrels full of mums.

“I’ll make anything, as long as I can put a flower in it,” she says. “I get to play with Mother Nature all day — what could be better than that?”

In Sweden, Midsummer is a holiday celebrated in late June. Flowers are woven into wreaths and crowns and girls gather seven kinds of flowers, put them under a pillow and dream of whom they are going to marry.

“It’s hard sometimes to find that many!” says Bo Corre, a Cold Spring resident who grew up near Stockholm. “We made garlands, decorated a maypole with birch branches and flowers — it’s so beautiful. Everyone turns out a fairy tale beauty, there’s silver light and a white night.”

Who couldn’t fall in love with flowers, in such a setting? 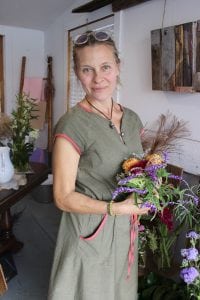 Bo Corre (Photo by A. Rooney)

Corre did, and earlier this year she opened a floral design shop, Now in Bloom, adjacent to the Cold Spring General Store on Main Street in Cold Spring. “Even as a girl I was always making bouquets,” she says. “When you work with your hands a lot, you start feeling really healthy.” She moved to the village in 2005 with her husband after traveling between London and New York City for years as an actress.

Her monochromatic compositions, often arranged in Mason jars and apothecary bottles, have been selling out every weekend. Now, tagging along with the General Store, she’ll be moving to the back of the space across the street formerly inhabited by Gallery 66 NY.

What sets her work apart, she says, is the personal touch. “I think about the person I’m making the bouquet for,” she says. “Do they favor pastels, are they more wild, organic — would they respond to branches? I see it as a creative quest. When I work with flowers; I can’t help but be happy. It’s about texture, smells, how colors make you feel.” Flowers, she says, “put joy in people’s lives.” 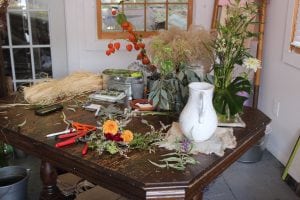 When Corre arrived in New York City as a young woman pursuing an acting career, she thought working in a flower store would be more enjoyable than waiting tables to support herself. She found a job at a French-owned shop on Mott Street, Pulex Floriste.

“I learned a lot there about creating amazing, gorgeous arrangements,” she recalls. She continued to work there even after the move to Cold Spring, and between roles. “I always go back and forth between acting and flowers,” she says. “I get and give energy from both.”

Corre says she decided to open her floral shop after Carolyn’s closed. “It dawned on me I should start my own business,” she says. She attended a series of small-business courses at area libraries. It worked. On Mother’s Day, Corre says, there was a line of customers down the block, “like for a rock concert.” 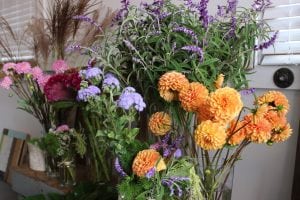 A colorful bouquet, from Now In Bloom (Photo by A. Rooney)

Corre also handles flowers for weddings and special events, including the Haldane School Foundation gala, but says she is happiest interacting with customers.

“Some of them know so much and we have amazing exchanges, and others are just curious.” she says. “Children come in and I show them how to put flowers together.  It’s a social happening in there and I’m happy that I can serve the community.”