Since 2004, rivalry has determined Section 1 champ

The teams will meet at 4:30 p.m. on Friday, Nov. 3, at Mahopac High School to determine who advances to the regional playoffs. 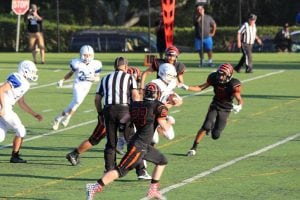 Haldane quarterback Brandon Twoguns (11) rushes up the middle against Tuckahoe during the Blue Devils’ 22-12 loss to the Tigers on Sept. 28. (Photo by Kim Giachinta)

Tuckahoe, which won the Class D state championship in 2006 and 2010, has dominated the series, winning 16 of 20 meetings. One of the four Haldane wins came last year, when the Blue Devils upset the Eastchester school, 26-6.

Haldane Coach Ryan McConville says he can barely remember a time when Tuckahoe wasn’t a rival. “Our alumni talk about it,” he says. “We compete in basketball, football and baseball.”

Tuckahoe Coach Tom Irti says of Haldane: “It’s difficult to beat a team twice in the same season. This is especially true with a team that knows us so well, as was proved last year.”

When the teams met in the tournament last year, each squad had only one win on the season. This year they each have six. That’s in part, says Irti, because Class C and D schools in Section 1 focused this year on creating schedules where teams could have more success and also limit late-season injuries.

“He’s a smart quarterback who makes good reads,” said McConville. What makes him dangerous is how he keeps plays alive with his scrambling ability. We will have our hands full stopping him.”

Tuckahoe: “For us to come out with the victory we must maintain our high level of physicality,” says Irti. “We have a high number of players that play the game with what we call ‘bad intentions,’ and there aren’t many teams that can match that. We will put the game on the shoulders of our seniors, who will be playing their sixth game against Haldane. They know what to expect, and they know that if they don’t get the job done, their high school careers are over. That alone is enough motivation.

“The key is to keep focused on the game plan, and not let last year’s slip-up ruin our confidence. Last season, one of the biggest factors against us going into the championship game against Haldane was the number of injured players we had. We were down eight starters from our earlier win against Haldane. This year we have everyone who was a part of our Sept. 28 victory.”

Haldane: “We have to stop the big play,” said McConville. “We can’t have a repeat of September, when they beat us with a hook and ladder and a double-reverse pass, one for a touchdown and the other that led to a touchdown. We must be fundamentally sound offensively and defensively and convert on the opportunities we have.”