Although former Putnam County District Attorney Adam Levy settled his defamation lawsuit in June against Sheriff Donald Smith for $150,000, their dispute bounced back into court on Oct. 26 over an allegation that Smith owes Levy another $50,000 for violating the agreement.

In a court filing, Levy’s attorney, Michael Sussman, asserted that Smith backpedaled on a public apology delivered as part of the settlement. Sussman filed his motion in Putnam County Supreme Court less than two weeks before the Nov. 7 election in which Smith, a Republican, is seeking a fifth term. 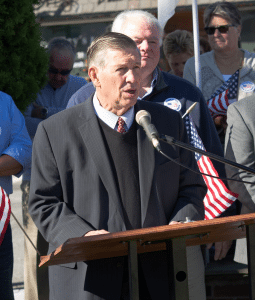 Sheriff Don Smith speaks at the Putnam County Stands Up for America rally on Oct. 1 in Carmel.

Both sides raised the specter of politics. Sussman claimed that though Smith apologized for disseminating falsehoods about Levy, he recently again belittled the former DA despite a provision in their settlement that prohibits Smith “from making public comments denigrating or deprecating to Mr. Levy.”

Consequently, according to the settlement agreement, Smith owes Levy an additional $50,000, Sussman stated. He asked the court for a Nov. 16 hearing.

Adam Kleinberg, who represents Smith, said he planned to file a counter-motion. “There was no violation of the settlement agreement,” he wrote in an email, suggesting the filing was a ploy to hurt Smith in the upcoming vote.

Although Levy sued Smith as an individual rather than in his capacity as sheriff, the Putnam County Legislature chose to pay $125,000 of the settlement. Smith agreed to pay $25,000.

In 2013, Smith issued two news releases alleging that Alexandru Hossu, a man accused of rape, lived in Levy’s house; that Levy interfered with the case; and that Levy should be investigated for harboring an “illegal alien” — Hossu, an immigrant. (After being found not guilty, Hossu sued Smith and others for $45 million for false arrest and prosecution. That case is pending.) 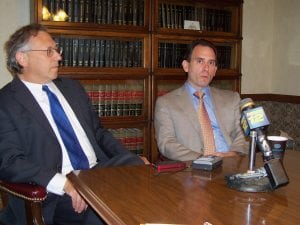 Then-DA Adam Levy (right) and his attorney, Michael Sussman, during a 2013 press conference in Carmel to discuss his lawsuit against the sheriff. (Photo by Holly Crocco)

Smith issued an apology retracting the 2013 news releases “unequivocally” and admitting the statements in them were “untrue; and I should not have made them.”

However, Sussman asserts, Smith and Kleinberg have both since told reporters that Smith issued the releases based on the facts as he knew them at the time, a crucial distinction that Sussman said implies Smith had evidence against Levy. “This besmirches Levy and leaves the public wondering,” and denigrated his client, triggering the $50,000 payment, Sussman stated.

To buttress his arguments, Sussman pointed to Smith’s war of words with Robert Langley Jr., his Democratic opponent for sheriff.

During an Oct. 5 news conference outside the Sheriff’s Department, Langley said that “Smith admitted that in 2013 he lied in order to target a political opponent,” meaning Levy. Moreover, Langley said, Smith had contacted the governor, FBI, U.S. attorney and other agencies and officials demanding they arrest Levy and/or remove him from office and that in court depositions or testimony Smith had “lied under oath” about his behavior. “Smith has abused the power of his office,” Langley contended. “We paid for Smith’s lies.”

In response, Smith blasted Langley for dealing in “assumptions” and “innuendo,” adding that as sheriff he strives daily “to provide the truth.” And if he does “later learn new information,” he insisted, “I make the correction.”

Separately, Kleinberg was quoted as saying his client had “apologized to Levy for certain statements made [in 2013] based on what was known to him at the time,” which Sussman argued implied Smith had evidence suggesting misdeeds by Levy. That, he said, contradicts the sheriff’s public apology.