Fallout from ‘me too’ reaches Highlands

The fallout from the “me too” movement sparked by the resignation of film producer Harvey Weinstein amid allegations of sexual misconduct has reached the Highlands.

On Nov. 3, Hamilton Fish, who has a home in Garrison and whose family has been prominent in Philipstown for more than a century, resigned as president and publisher of The New Republic following complaints by female employees at the left-leaning political magazine. Fish had held the position since February 2016. He had taken a leave of absence on Oct. 30.

“As I understand it, some employees, to my deep dismay, complained this week that my presence had led them to feel uncomfortable at The New Republic,” he wrote to the magazine’s owner, Win McCormack. “It’s my sense that our office culture has been harmed, and the best way for me to help the organization move past this is by withdrawing…. Women have longstanding and profound concerns with respect to their treatment in the workplace. Many men have a lot to learn in this regard. I know I do.”

Fish, 65, known as “Ham,” is the longtime chair of the Board of Trustees of the Alice Curtis Desmond and Hamilton Fish Library in Garrison, which was founded by his grandparents. He also serves on the board of Riverkeeper.

On Nov. 2, after a meeting held the day before, the Desmond-Fish board announced in a statement that Fish would step down there, as well.

“The Board of Trustees of the Desmond-Fish Library, with regret, has accepted the request of Ham Fish for a leave of absence from his duties as president and trustee, following 24 years of distinguished service to the library and the community it serves,” it read. “The library will continue to be governed in accordance with its bylaws and mission of service. The Desmond-Fish Library is an equal opportunity employer and has long maintained a strong policy against discrimination or harassment.” 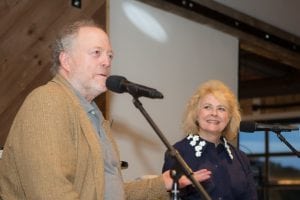 A Riverkeeper spokesman, Cliff Weathers, said: “We will follow the inquiry being undertaken by The New Republic. As always, Riverkeeper will honor its commitments and obligations to our staff, volunteers and external partners.”

Reached by email on Nov. 1, Fish said he had been asked not to comment while The New Republic reviewed his status. He told The New York Times in an email that he resigned because he felt the controversy would derail the progress being made at the magazine but that he had not yet been told the details of the grievances. A reporter for Deadline Hollywood wrote that Fish emailed him on Oct. 30: “Classic takedown underway. We’ll see.”

Fish was appointed president and publisher of The New Republic after Facebook co-founder Chris Hughes, who also has a home in Garrison, sold the magazine to McCormack, owner of the literary journal Tin House.

In a letter to the staff of the magazine, McCormack wrote: “I have been made aware that a number of employees have come forward in the last few days to express concern about certain workplace interactions that have created an uncomfortable environment for them. As I understand them, these concerns relate specifically to interactions between Ham Fish and a number of women employees.”

Fish had long been associated with The Nation, working to rescue it in 1977, and serving as publisher until 1987. From 1995 to 2009, he was president of the Nation Institute. He also produces documentary films.

His father, Hamilton Fish Jr., served as a Republican in the U.S. House from 1969 to 1994. His grandfather, who was born in Garrison in 1888 and lived to be 102, was a Republican congressman from 1920 to 1944. The first, and best known, Hamilton Fish was elected as a Whig to Congress in 1842 and then served as governor of New York and in the U.S. Senate before being appointed Secretary of State under President Ulysses S. Grant.

Ham Fish ran for Congress in 1988 and 1994 as a Democrat in Westchester County but lost. In the 1988 race, his grandfather famously supported his grandson’s Republican opponent.