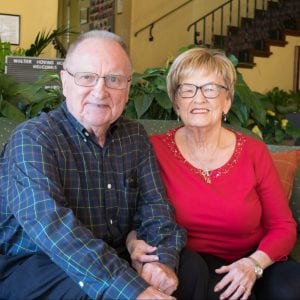 Benton was born in Seattle on Aug. 29, 1933. He and Elsie, who survives him, were married for 65 years. They had known each other since kindergarten.

For nearly 50 years, as Assemblies of God ministers, the Bentons visited with women on the streets of New York City and Los Angeles to offer them a way to escape drug and alcohol addiction and prostitution.

The couple founded their Christian recovery center in Garrison on June 21, 1967. At the time it opened, the home had 12 residents and four staff members. The couple was known as “Dad B” and “Mom B” to residents.

Prior to moving to Garrison, the Bentons were pastors at a church in Washington state, directors for Youth for Christ and missionaries in Japan. In 1965 they were asked by David Wilkerson, the founder of Times Square Church best known for his book, The Cross and the Switchblade, to join his Teen Challenge ministry in Brooklyn. The Bentons moved with their three children to Farmingdale, New York, and John Benton began traveling with Wilkerson as the organization’s associate director.

In September 1965, Wilkerson asked Benton to become director of the Women’s Home in New York City. John and Elsie began to walk the streets of the city, looking for young women in need of assistance. (John later wrote a book, Debs, Dolls & Dope, about their experiences.)

At the same time, the Bentons began to search for a place outside the city to establish their own recovery home. In March 1967, they met Walter Hoving, the former longtime chairman of Tiffany & Co., and his wife, Pauline, at a dinner party. Hoving helped secure funding for the couple to buy, for $175,000, a 22.5-acre property and home on Snake Hill Road in Garrison.

In 1984, the Bentons expanded the ministry to California, opening a home in Pasadena in the former Mira Monte Hotel, and in 2006 they added a third home in Las Vegas. A fourth home in Oxford, New Jersey, opened in April. Women are allowed to stay at the facilities for up to a year; more than 23,000 have lived at one of the homes over the past five decades.

“We’ve created a homelike atmosphere,” Benton explained to the Los Angeles Times in 1991. “But we try to make boundaries between a homey environment and a structured environment. Our girls can’t just come here and hang out.”

The Bentons moved to Garrison in 1967. They relocated to California following the opening of the home there but kept a residence at the home in Garrison until May 2016 and for many years visited several times each month.

Besides Debs, Dolls & Dope, Benton wrote dozens of other books, including One Lady at a Time, a history of Hoving ministry, and a series of Christian young adult novels about troubled women who find salvation at the home.

“John Benton made a huge impact on me when I came for help in 1992,” said Beth Greco, a Garrison resident who is now the CEO and president of Walter Hoving Home. “He was a godly, humble man of wisdom and integrity, but most of all he truly cared for people.

“He had a way of recognizing potential in the women who were in the program and then helping us reach our destiny,” she said. “He gave his life in service to the work of God as he helped women from all over the world find freedom from addiction, including myself. His example inspired many of us.”

Besides his wife, Benton is survived by his children, Marjii Smith (David), Connie Adams and Jim Benton (Judy). He is also survived by nine grandchildren and five great-grandchildren.

A memorial service officiated by Jim Benton will take place on Nov. 7 at the Lake Avenue Church Chapel in Pasadena. Memorial contributions may be made to the John Benton Memorial Fund at the Walter Hoving Home, P.O. Box 194, Garrison, NY 10524 (hovinghome.org).

10 thoughts on “John Benton, Co-Founder of Walter Hoving, Dies at 84”