Nelsonville’s cell tower debate expanded onto new ground — literally — in late October when village officials informally suggested putting it on a relatively flat site in the Nelsonville woods, rather than the mountainous parcel officially under review.

Homeland Towers, which represents cell phone companies such as Verizon, has asked the village for approval to construct a tower on a 9.6-acre site on a steep hillside above the Cold Spring Cemetery. That project, near Rockledge Drive and Moffatt Road, is being considered by the Zoning Board of Appeals and Planning Board, which scheduled a joint public hearing for Wednesday, Nov. 15. 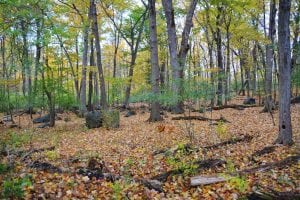 The Nelsonville Village Board has suggested using 4 acres of village-owned land in this area, off Cedar Street, as a cell tower site. The property is bordered by Secor Street. (Photo by L.S. Armstrong)

The Rockledge plans provoked strong opposition led by the grassroots Save the Cold Spring Cemetery Committee organized by Fran O’Neill, wife of Nelsonville Mayor Bill O’Neill. The O’Neills live on Moffatt Road, although whether the cell tower would affect their view is unclear. Doug Logan, owner of the proposed tower site, runs the Cold Spring Cemetery.

Given the ongoing debate, the Village Board proposed an alternative location: a roughly hexagonal, 4-acre, wooded tract owned by the village behind the Philipstown Volunteer Ambulance Corps headquarters and American Legion building on Cedar Street. The board scheduled a public meeting for Wednesday, Nov. 8, to discuss the idea.

A tale of two sites

If the vision of a 110-foot tower overlooking an historic cemetery proved contentious, so too could a plan to put it in the Nelsonville woods. 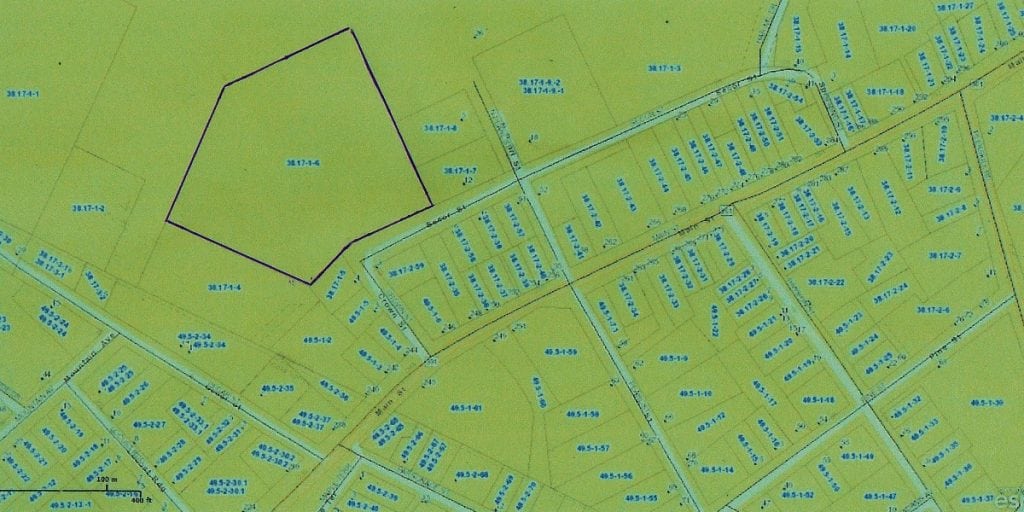 The outline shows the 4-acre parcel owned by Nelsonville (38-17-1-6) that village officials have suggested as an alternative site for the cell tower proposed for Rockledge Drive. (Map prepared by Village of Nelsonville)

In an e-mail, Dave McCarthy, who lives on Main Street near the proposed site, called the suggestion “troubling for a few reasons: It’s close to two cemeteries, it floods and is part of an aquifer; it’s next to the Nelsonville Nature Preserve; and, worst of all, it’s as close as you can get in Nelsonville to the Haldane Elementary School.”

Well-traveled footpaths wind through the woods, which get boggy in spots, and two graveyards, one dating from the latter 1700s and the other from the mid-1800s, are nearby.

A second cell tower proposed by Homeland Towers for Vineyard Road, near the intersection of Route 9 and Route 301, is being scrutinized by the Philipstown Zoning Board of Appeals and its Conservation Board. The two panels have scheduled a joint public hearing for Monday, Nov. 13, at 7:30 p.m. at the Philipstown Recreation Center, Garrison.

“I fully expect there’s going to be substantial opposition, which is fine,” Mayor O’Neill said on Tuesday (Oct. 31).

The Village Board gave Homeland Towers permission to evaluate the Cedar Street parcel because it wants “to make available a site which from an aesthetic perspective is more acceptable to this community than the Rockledge site,” he said. At the Nov. 8 forum, the board intends “to present the facts, answer questions and give people the opportunity to express their views,” O’Neill added.

Homeland Towers looked at a number of alternatives in Philipstown and Nelsonville but found them unsuitable, Homeland Towers attorney Robert Gaudioso told the Nelsonville Planning Board on Oct. 25. The Secor property, however, “is a feasible alternative” to the Rockledge site, he said. “It is promising.”

Gaudioso elaborated Wednesday night (Nov. 1) at a Nelsonville Zoning Board of Appeals meeting. The Secor tract “works from a technical standpoint … quite well, actually,” he said. He mentioned the Nov. 8 forum and said that if the Secor site is “a reasonable alternative from a village standpoint,” if the village agrees to a lease, and if the project passes environmental and related reviews and gets approved, “we would be happy to go to that as an alternative and drop this [Rockledge] application.” 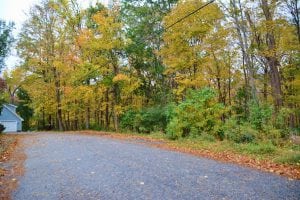 Secor Street, near the intersection with Crown Street: The proposed cell tower would be constructed on 4 acres in the woods to the right. (Photo by L.S. Armstrong)

Unlike the Rockledge parcel, the Nelsonville woods can be reached by village streets. Questions of access to the Rockledge Drive site came up at the Planning Board meeting. As designed, the tower would be approached over what Bill Bujarski, the village’s building inspector and code enforcer, described as about 75 feet of unimproved surface off the main road. For fire department vehicles, “getting to the site is the problem,” Bujarski said.

Gaudioso responded that the tower would be monitored from afar continuously but only checked in person occasionally. Moreover, he said, compared to the potential difficulties encountered in reaching private homes, “the issue of emergency services access is minimal.” Homeland Towers representatives also said they might reconfigure their initial design to minimize accessibility concerns.

At Nelsonville’s Planning Board meeting, the Homeland Towers team also distributed photos of state-of-the-art cell towers disguised as evergreens. Prior fake trees, including some in Philipstown, “are horrible,” Gaudioso conceded. “They don’t compare with what we’re proposing.”

6 thoughts on “Anyone Want a Cell Tower?”