After touring countless towns to perform, singer and songwriter Dar Williams will roost at her own, Cold Spring, on Nov. 19 at the Chapel Restoration. She’ll sing but also read from her new book, What I Found in a Thousand Towns.

The book, whose subtitle is “a traveling musician’s guide to rebuilding America’s communities — one coffee shop, dog run and open-mic night at a time,” describes what Williams says she has learned from visiting so many places across the country and around the world. 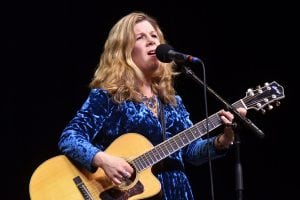 At its core is a concept she calls “positive proximity.” She explains: “When people transcend the myth that proximity means conflict and invasion of privacy, they gravitate toward finding ways to integrate the talents and skills of their community members.”

Williams begins the book with a rolling account of a mash-up of talents who contribute to creating a sledding hill in an unnamed town. There’s the person who has the idea, who mentions it to an acquaintance who tamps the earth on a suitable hill, who gets his “guy with a plow” friend to make a track when snow appears.

An arborist clears some trees. Kids begin using it, accompanied by a parent who sells hot chocolate to fund PTA afterschool programs; volunteers gravitate back to the school; the library joins in.

Williams goes on to chapter-length anecdotal descriptions of nine locales where variants of this community-building have occurred. The first chapter details Beacon’s transformation over the past 15 years.

Yet, as the country appears to fracture and divide, at least politically, and personal animosity rages on social media, how is such linkage possible?

“Communities thrive when there is a general sense of accessibility, and a center,” Williams says. “What helps us to get out of our own homes, find ourselves in the commons, and become committed to it? How do we give the most people access to it, physically, economically?

“I looked at communities where people had hometown pride and worldly welcomes. They had identified roots, whether it was a food culture, an arts or history culture, who welcomed the world in, either as residents or travelers,” she says. “You’ll grapple, but it’s a good thing.” 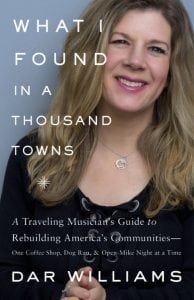 At the same time, Williams says she doesn’t look at villages such as Cold Spring with rose-colored glasses. “My post-Aquarian theory for community building is we don’t start by hugging strangers or assuming we want the same thing,” she says. “We dig into the identity of our towns. You can get in a car and go to Route 9 and live your life without going to a downtown. I’ve seen places where people have a center to their towns, and they thrive.” Towns that thrive, she observes, usually have an “ethos in the air of collaboration.”

Though, like many folk singers Williams is perceived as ardently liberal, she’s emphatic that what she’s discussing is non-partisan. “The assumption is that only liberal people are willing to pour their time and tax dollars into downtowns,” she says. “This is not the case, and in checking out the towns I love so much, many lean Republican. The truth is, towns that succeed are more than partisan, which doesn’t mean hiding your politics. Coming out of this process, my motto is, ‘Think in bridges.’ Find them, cross them; it always expands who you are. I don’t see a lot of lines anymore, because I’ve met so many people.”

In Philipstown, Williams feels engaging each sector of the populace is crucial, beginning with retirees. “They have so much expertise,” she says. “They hold the history of the town, and are often very patient with children.”

Also important is finding the right blend of commerce that caters to both locals and tourists. “The only way to keep the pulse of downtown is to have the whole layer of fancy stuff that the visitors will buy,” she says. “Without some of this, you can’t have the parades and all the great things that bring life into downtown.

It won’t all flow naturally, she says. “Effort has to be made, because so many things are pulling us out of downtown. In Franklin, Tennessee, I couldn’t find an aspirin. It has history, fantastic jewelry, a gorgeous theater, but no aspirin. The challenge to the old guard is not new residents, it’s the big box stores, malls and the deterioration of pedestrian culture. Having a downtown that sells shovels and Scotch tape and milk that’s somewhat affordable is essential.” 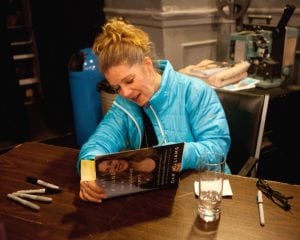 Dar Williams signing copies of her book at the Brattle Theatre in Cambridge, Massachusetts (Photo by Tessa Gordon)

Whatever its fissures and growing pains, Philipstown is home sweet home to Williams, who spends much of the year touring. “I appreciate how much I feel like I belong in this town,” she says. “I can be my real self here. I see people wearing their pajama bottoms as they walk their kids to school. I can invite friends in without clearing the breakfast dishes.

“I went to a town out West which had many similar things to this one, but it was uptight and unfriendly. People weren’t smiling and you could feel the unease. Our town has a bulletin board full of fliers for weird events, and lots of cross-pollination: the library trying out a zombie night, the outdoor films shown by the river, the firefighter academy for kids. There is so much vitality here.”

Her free program, which begins at 4 p.m., is part of the Chapel Restoration’s Sunset Reading Series. A wine and cheese reception will follow. The chapel is located next to the Metro-North train station in Cold Spring, where parking is free on weekends.