One year, when I was in college, I lived in an off-campus house with my three best friends. We had not yet learned how to be OK with our differences, so while we loved each other dearly, we also fought in ways that confused and distressed us.

One recurring fight was about apples. Stephanie, an artist, wanted to keep them in a bowl on the kitchen table. Laura, a pre-med, thought they belonged in the refrigerator because apples get mushy if you leave them out.

At heart, I sided with the pragmatic Laura. No one likes a mushy apple. But, as a philosophy major, I felt it was my job to see both sides. Apples are pretty, I conceded, and by leaving them out, one arguably benefits from them in two ways — aesthetically as well as gustatorily — thereby increasing the total good derived from them. In short, I was useless.

All fall, whenever Laura passed through the kitchen, she would place the bowl of apples in the refrigerator, and whenever Stephanie came by, she’d take it out again.

I like to think I have grown more sensible in the years since college. Apples are for eating, not viewing, and thus belong in the fridge. But lately I’ve come to suspect that my storage habit may have a darker side. 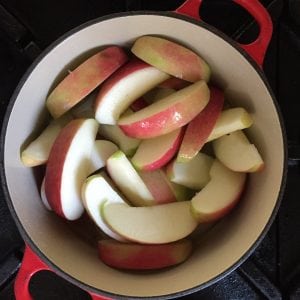 A bowl laden with sliced apples (Photo by C. Barbour)

Last Saturday, as I was leaving for the Cold Spring Farmer’s Market, I decided to grab an apple for breakfast. When I opened the refrigerator, I noticed that we still had more than a dozen apples — some from a friend’s trees, others from the previous week’s market. No need to buy apples, I thought to myself. My brain actually formed the words: If there’s one thing I definitely do not need to buy, it’s apples. Nonetheless, I came home an hour later with seven apples. They’d looked so pretty, taut and rosy-green, I couldn’t help myself.

As I put them away, I wondered if parts of my refrigerator function like buried areas of my subconscious: The shelf of denial. The dissociative drawer.

The next day, my husband, Peter, returned from New Hampshire with eight apples. He had gone up there with his brothers to shut down the old farmhouse for the winter, and the tree by the well had been “laden” with them.

“Thank you,” I said, thinking: Laden? And you brought back only eight?

As is surely clear by now, this is all just a setup for a third-grade word problem: “If you have 14 apples in the refrigerator, eat one apple, buy seven more apples, and then your husband comes home with eight apples, what do you have?” By my calculation, the only right answer is applesauce. 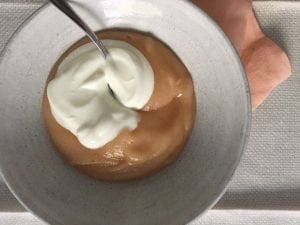 Mixing in the mayo (Photo by C. Barbour)

Of course, there are many other excellent things to do with apples, from salads to pies. But most of these use five apples, tops, and I needed to go nuclear. So I began playing around — apples, cardamom, and lime; apples, lime, and jalapeno; apples, ginger, and raspberry — slicing and simmering, and, frankly, feeling a bit defeated. Applesauce makes all those weeks of refrigeration irrelevant; it’s an art major’s solution.

Meanwhile, as I was busy coring, slicing, simmering, lamenting and pureeing, lunchtime came and went. Suddenly I was starving. I remembered a certain grilled curried-cheddar sandwich with tart apple slaw I’d had years ago at Saltie, a fantastic Brooklyn joint. I didn’t have half the ingredients on hand, but craving makes fine improvisers of us all. I sliced a Pink Lady into matchsticks, tossed it with lemon, parsley, celery and olive oil, then made myself a bubbly, open-face sandwich. It was sublime. Or perhaps I was too hungry to judge? When Peter came home, I tested it on him, then later repeated it for George and Henry. They all agreed: Delicious.

You know the saying: “Life is what happens when you’re making other plans”? Sometimes, for me, good recipes are what happen when I’m making other recipes. It’s like I throw open my crowded mental refrigerator to grab something else, and there it sits: the perfect idea, perfectly crisp, waiting. 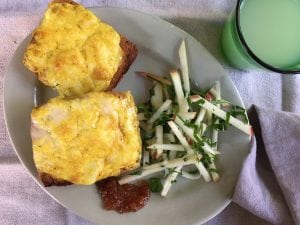 You can add a pinch of cayenne, turmeric, ginger and/or paprika to the curry to pop the flavor. The original recipe calls for focaccia, but I used sliced ciabatta. Plain bread would also be fine.

Thinly slice the apple, then stack the slices and cut into matchsticks. Toss with the parsley, celery, lemon, oil and salt, and set aside.

Lightly toast the roll. Meanwhile, combine the mayonnaise and curry powder. Mix in the grated cheddar. Spread the cheese mixture onto the toasted roll (you may need to press it into place). Place under the preheated broiler and broil until bubbly and golden brown on top.

Serve with chutney and apple slaw.