Despite the cold and rain, turnout for the Nov. 7 election in Beacon was up significantly from 2015, with hundreds more residents casting votes. (Countywide the turnout was 38 percent.) It was more than enough to buoy the Democrats, who easily won all six council seats, in four cases by more than a 2-to-1 margin. 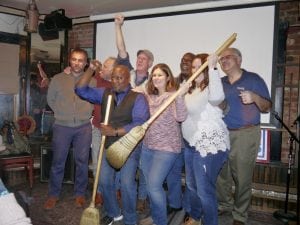 The two incumbents on the ballot, at-large members George Mansfield and Lee Kyriacou, were re-elected with 44 and 42 percent of the vote. Republican challenger Amando Downer, who was ill during the campaign and did not appear at a forum in October, received 13.5 percent.

Kyriacou, who was elected to his ninth term overall, said the mix of four newcomers and two veterans (Mansfield was elected for a fifth term) will allow for healthy debate.

“The new members are going to bring quick learning and hard questions,” he said. “That’s going to be good, because when we’re all in consensus, I think we expose ourselves to making mistakes.”

McCredo, one of the founders of the Advocates for Beacon Schools, said voters were looking for candidates they felt they could trust.

“This election was all about who you spoke with and who you established that personal connection with,” she said. “That made all the difference.”