John Van Tassel and Michael Leonard, both Democrats, retained their seats on the Philipstown Town Board by comfortable margins over challenger Tim Greco. 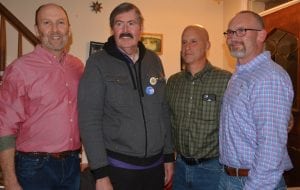 Van Tassel said the renovation of the 150-year-old Town Hall will be a priority. “It’s a disaster,” he said. He also cited the nearly completed overhaul of the annex, a former residence, behind Town Hall, as an example of what can be accomplished.

Leonard said his win was “all about results” in terms of the board “getting things done.” The five board members, he said, have “different opinions on some issues” but a common interest in collaborating.

Shea concurred. “We don’t always agree, but we know how to disagree in the right way,” he said. “I think people are pleased with the work we do.”

After the vote, at a gathering at Doug’s Pretty Good Pub on Main Street, Greco offered congratulations to Van Tassel and Leonard. He said the election had “played out exactly as I thought it would. I thought they had a great shot at winning, and they did…. Hopefully going forward, we can work together for a better Philipstown.”

At the same time, he said, the campaign was “the worst, the most negative run I think in the history of Philipstown. I’ve never experienced anything like that. But that’s how they won.”

Greco vowed to run again in 2019, when the seats on the five-member board held by Nancy Montgomery and Robert Flaherty will be on the ballot, and encouraged others to become candidates, as well. “It was a very easy process,” he said. “It was the American democracy at its best. And I had a great team.”