It’s one of those largely forgotten but fascinating chapters in local history: a 250-acre resort with close ties to the Communist Party that thrived for three decades along Route 9D between Cold Spring and Beacon.

Camp Nitgedaiget, also known as Camp Beacon, was established in 1922 by the United Workers Cooperative Association (UWCA). It initially provided alternative housing for its members, many of whom were garment workers who lived in squalor on the Lower East Side. The UWCA had its roots in the Communist Party; most of its founders in 1910 were members. 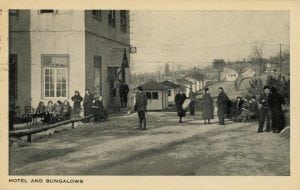 “It was the first cooperative proletarian adult vacation resort in the U.S.,” explained Diane Lapis, a member of the Beacon Historical Society who shared her research on the camp during a Nov. 4 presentation at the Butterfield Library in Cold Spring.

Nitgedaiget is Yiddish for “no worries.” In that spirit, the camp, which straddled Route 9D just south of present-day Stratus Lane, provided a low-cost rural getaway for its urban members, many of whom were Jewish liberals and/or Communist sympathizers. Many city dwellers described it as “utopian.” At its peak, it hosted 1,000 people at a time.

The portion of the camp west of 9D had bungalows, a dining hall, sports facilities and a lake, as well as access to the river for boating and fishing. A hotel was converted to a library and hospital and replaced by a 200-guest facility that operated year-round. The interior door frames were decorated with the hammer and sickle and the bungalows bore the names of Soviet republics. 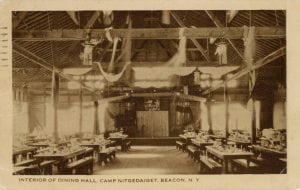 On the east side of the highway was the main office, a pool and waterfall, more bungalows, platform tents and a “casino” that served as a dance hall and theater.

Daily transportation provided by the UWCA from New York cost $2.25 per person, or about $40. Other campers took The Dayliner along the west bank of the Hudson River to Newburgh and ferried to Beacon. One local resident, Janet Rust, recalls her father and uncle operating a shuttle bus from the Cold Spring train station to the camp. 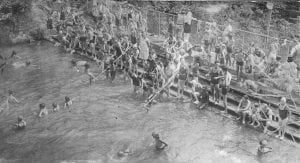 The camp pool in 1929 (Photo by Joe Wiener/Collection of the Tamiment Library, NYU)

The pool, which was formed by an 85-foot high dam, was especially popular. Swimmers sitting on its wooden bleachers were led in anthems such as The Internationale and The Red Army March.

The Communist influence was even more visible in the 800-seat dining hall, which was adorned with a portrait of Lenin, a scarlet hammer and sickle and 15-by 10-foot sign that read “Strong Farmer and Worker Party in this Country.” It was the only location at the camp where men were required to wear a shirt, a rule reinforced by a sign that read, “Comrades, your bare backs are not inspiring to appetites.”

While the resort was designed for adults, children often visited with their parents. Lapis, who interviewed people now in their 80s who attended as kids said they told her “it was place for fun and socializing but they may have gotten radicalized along the way.”

However, not all camp guests were Communists. “They went because their friends and neighbors spent time there, not knowing that there would be Marxist theater or speeches from Communist leaders,” Lapis said. 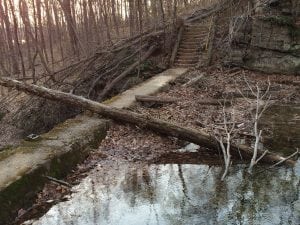 Many musicians, actors, dancers, poets and directors visited the camp and performed in its casino. Jules Dassin, director of Never on Sunday (1960), was the entertainment director in the 1930s. Warner Brothers star John Garfield, who frequented the camp, would be blacklisted during the McCarthy era. S.J. Perelman, known for his humorous pieces in The New Yorker, visited. And Woody Guthrie and Pete Seeger, who built his home on property just above the camp, performed there.

Lapis said the Communist presence became less prominent with each new generation of visitors. The camp was abandoned between 1952 and 1954 and an arsonist torched the hotel, dining hall and casino in 1963. Four years later, the property became part of the Hudson Highlands State Park Preserve.

Today, the Notch Trail off Route 9D passes by what little remains of the bustling resort: rusty handrails and moss-covered steps leading to a ravine and the dam that created the pool.