The six-month-long public hearing on the environmental impacts of a proposed 307-unit development in Beacon will continue for another month, following a spirited debate at the Nov. 14 Planning Board meeting.

The environmental hearing is the first in a number of hurdles the Edgewater development near the riverfront must clear before it can be approved. Future hearings will address the project’s subdivision plans, variances and a special use permit.

With apartments ranging in size from studios to three bedrooms and spread across seven buildings, Edgewater would be the largest development ever in Beacon. It would sit on 12 acres northeast of the Metro-North train station. 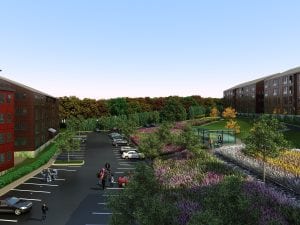 A rendering of one view of the proposed Edgewater development

Now, however, project planners and Beacon City School District officials are gridlocked over how many students, and at what cost, the development would add to the system. Edgewater consultants say the development will produce fewer than 50 new students, with increased tax revenue more than balancing out the cost of educating them.

The district contends that projection is based on metrics that underestimate population trends and the cost of education.

The dispute was hardly resolved after the hearing Tuesday night.

A planning consultant hired by the city, John Clarke, agreed with the Edgewater consultant that the project’s impact on the school district would be marginal. But numerous residents urged the Planning Board to issue a “positive declaration,” or an indication that the project would have an adverse impact on the surrounding environment — in this case, the schools. It would not end the project but would require the developer to somehow mitigate the impact. 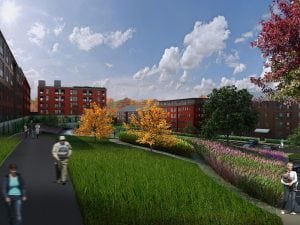 Another view of the proposed Edgewater project

“We’re already struggling,” said Debbie Brennen, a Sargent Elementary parent, during the Nov. 14 hearing. “Our buildings are old. Please take into account our kids. Beacon has come so far in the last 10 years. We can’t mess it up. Education is huge and if you don’t have good schools, forget it, you have nothing.”

With two of its seven members absent and no clear consensus among those present, the Planning Board opted to continue the hearing at its next meeting, scheduled for Dec. 12. “Next month, we make a decision,” said Chairman Jay Sheers.

The parcels (152 and 158 Fishkill Ave.) are among a handful that the council is considering rezoning into the Central Main Street district. Calling it a “perfect opportunity,” Angela Dellaportas Ingham, one of the owners, said expanding the Main Street corridor would bring foot traffic to new retailers.

“Land is a commodity that we can’t replicate, so we want to be smart in what we develop,” she said. “It’s important to offer [people who live in and visit Beacon] more, to give them that feel so they’ll want to come back.”

The FADC has not submitted plans but will do so if the council votes to rezone the properties, Dellaportas Ingham said.

The Planning Board held a public hearing on Nov. 14 on the latest proposal for the Parcel L property on Wolcott Avenue (Route 9D). The project, called River Ridge, would include 18 townhouses on the 3-acre property.

The plans include construction of a pedestrian path and stairway leading to the Beacon train station, as well as a small pocket park near Beekman Street. Feedback from the public during the hearing was generally supportive, although some neighbors expressed concern about the park.

The public hearing will continue at the Planning Board’s December meeting.

The Planning Board approved Scenic Hudson’s plans to nearly double the number of parking spaces at the base of Mount Beacon.

The project will be completed in the spring and will involve moving the park’s  Howland Avenue entrance farther away from Route 9D and turning it into an exit. The lot will be widened and oriented for one-way traffic, and individual spaces will be marked, increasing its capacity from 40 to 77.

Several people spoke during the hearing before the board’s vote, with nearly all supporting the expansion but lamenting that it won’t be a long-term solution for the cars that routinely line Howland and adjacent streets on holidays and weekends after the lot has filled.

“I’m for this, but anything beyond this, you need to find option B or C,” agreed board member Randall Williams.