What’s next: The council on Nov. 6 tightened regulations for street closings. Event sponsors are now required to notify nearby property owners of their application, and the city will post approved permits online. Only the applicant, police chief or highway superintendent may remove barricades; contact information will be available on the city’s website and posted on the barricades. A $500 fine will be assessed for moving or removing a barricade without authorization.

What’s happened: Frank Skartados, who represents Beacon in the state Assembly, announced in September that he had secured $500,000 in funding for the restoration of the historic Tioronda Bridge. Skartados proposed that the bridge be rebuilt with a walkway and one lane of low-speed vehicular traffic.

What’s next: Several documents, including a traffic study and design report, are required before the state will consider the one-lane design, City Administrator Anthony Ruggiero told the council on Nov. 13. Mayor Randy Casale said he hopes to meet with Skartados and U.S. Rep. Sean Patrick Maloney to discuss the bridge before the council decides whether to pay nearly $73,000 for the studies. 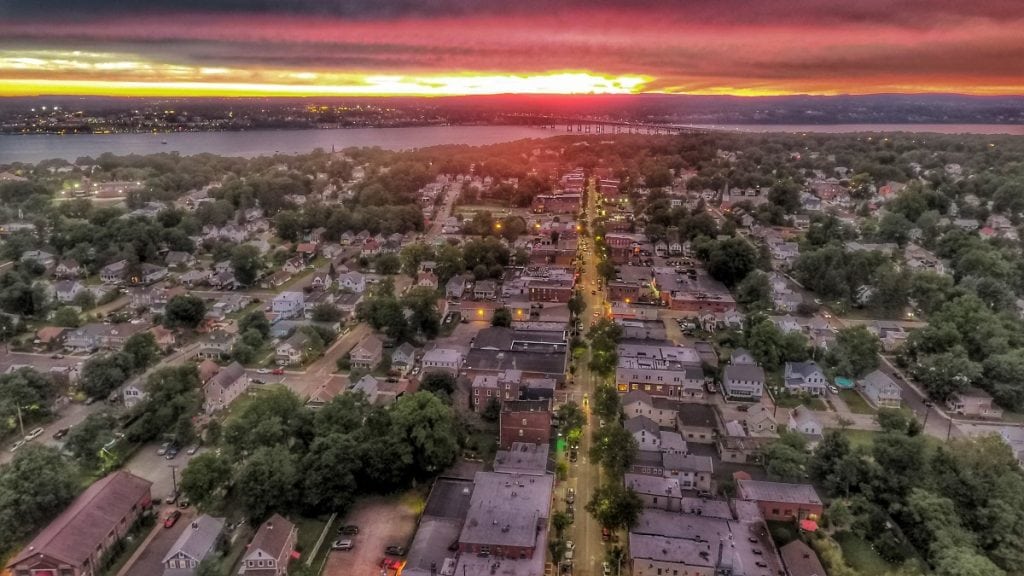 Main Street in Beacon, looking northwest toward the bridge (Photo by Scott Harrison)

What’s happened: On Nov. 6, Casale announced that Beacon is under a Stage 1 drought alert, which is triggered when the city’s three reservoirs (Cargill, Mount Beacon and Melzingah) dip to 60 percent of capacity.

What’s next: During the alert, residents are urged to conserve water by not watering lawns and golf courses, washing homes or sidewalks with a hose or washing cars at home. They also are encouraged to fix water leaks. The Conservation Advisory Committee has drafted guidelines that have been posted to the city’s website. Water conservation during a Stage 1 alert is voluntary, but if the reservoir levels dip to 40 percent, it will become mandatory.

What’s happened: Beacon and the town and village of Fishkill launched a joint study of their police departments last year to identify ways to cut costs without cutting services. The study was funded by a grant from the Dutchess County Municipal Shared Services and Consolidation program and conducted by Hudson Valley Pattern for Progress.

What’s next: In a presentation to the council on Oct. 30, Pattern recommended that the town and village of Fishkill merge their departments but said Beacon should remain independent. Integrating a department with full-time officers with two that have only part-time duties would present more challenges than benefits, the researchers said. The study did suggest other ways for the three departments to share costs, however, such as a shared system for record-keeping and a pilot “reserve officer” program to train police academy graduates.