There are few people who will be affected more by the closing of the nuclear power plant at Indian Point than Tom Carey. As president of the Westchester Putnam Central Labor Council, he represents hundreds of the workers at the plant. He also has worked there, as have his grandfather, father, uncle, sister and brother.

“I have a lot of skin in the game,” he said. “We all thought it was a completely safe and reliable place to work.”

Carey is a member of a task force appointed by Gov. Andrew Cuomo to address the aftermath of an announcement in January that Indian Point will shut down in 2021. The council, which includes labor officials, elected officials and representatives from state agencies, has been asked to prepare by April a report that will examine, among other things, what will happen to the plant’s 1,100 workers and the regional economy.

Taxes collected from Entergy, which owns Indian Point, account for nearly half of the annual revenue of the Village of Buchanan, the home of the plant. Of the $32 million the village receives, $24 million goes to the Hendrick Hudson School District.

Because decommissioning the site could take as long as 60 years, the Town of Cortlandt (which includes Buchanan) is searching for ways to soften the financial blow. It has begun setting aside at least $100,000 annually to assist with the transition, and laws are being drafted that would allow the town to continue to collect some tax revenue from Entergy for as long as spent radioactive fuel is stored at the site, which may be indefinitely.

Even if limited tax payments continue, the closing will cause a significant loss of jobs. While Entergy has said some workers could be transferred to a facility it owns in New Orleans, that doesn’t sit well with Cortlandt Supervisor Linda Puglisi.

“We may like to visit New Orleans, but we don’t want our residents to have to move there,” she said at a Nov. 3 forum at the Desmond-Fish Library in Garrison on the Indian Point closure organized by The Journal News and Clearwater.

There is time. Major plant closings are rarely announced years in advance. But the window also may add to the challenge because workers can’t be reassigned while the plant is operational.

Mario Musolino, executive deputy commissioner of the New York State Department of Labor, said at the forum that his agency was confident many of the workers can find new jobs, noting that about 350 employees are utility workers, 200 are Teamsters mostly dealing with security and many of the remainder have specialized skills easily applied in other jobs.

“When you start breaking down the workforce into the various groups and different skill sets, it becomes a manageable challenge,” he said. “This isn’t the same thing as when a large retailer closes and suddenly everyone is in competition with one another.” 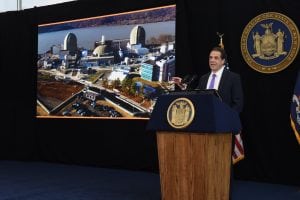 As part of a State of the State address earlier this year, Gov. Andrew Cuomo described an agreement to close Indian Point in 2021. (Governor’s Office)

The state is discussing programs that would retrain workers from Indian Point for renewable energy projects, Musolino said. He also noted that by the time the plant closes, as many as 40 percent of the workforce may be eligible for retirement. “But I want to caution folks: Being retirement-eligible doesn’t mean that’s the choice you want to make,” he said. “I’m retirement-eligible, but I haven’t retired yet.”

There’s also the unresolved issue of who will do the decommissioning work. If an agreement can be made with Entergy to have the plant workers do it, that would help it remain a significant source of jobs, possibly for decades. However, to close other plants, Entergy has used a contractor which brought in its own labor force.

“I know the way these guys operate,” Carey said. “They’re a ragtag group of people from all over the country, when our local members are going to be out of work.”

Carey pointed to the Project Labor Agreement used for the construction of the new Mario Cuomo Bridge in Tarrytown as a possible model for Indian Point. “We brought the bridge in ahead of schedule, under budget, with no major injuries on the job,” he said. “It’s a big cost savings, and it’s all local labor.”

One thought on “Where Will the Jobs Go?”