Chapel School (Bronxville) 19, Loretto (Grade 5 girls) 12
St. Joseph’s (Bronxville) 14, Loretto (Grade 5 girls) 4
St. Lawrence (Brewster) 39, Loretto (Grade 6 boys) 26
Fourth-grade Boys Win First Two
The Lady Loretto fourth-grade boys’ Catholic Youth Organization team started their inaugural season with a busy weekend that included a road game on Nov. 18 against Ann Seton in Shrub Bush and a home game on Nov 19 against St. James of Carmel.
In the first game they showed they were a little green and fell behind by 8 in the first half. In the second half the defense, lead by Ty Villella, Anthony Bailey, Will O’Hara and Giovanni Siciliano turned up the pressure in a major way. Steal after steal and stop after stop led to fast break points for Luke Bozsik and some of the other players. After Zack Fox drilled two free throws to give the boys the lead, they held on to it and walked away with a big comeback win 16-13. 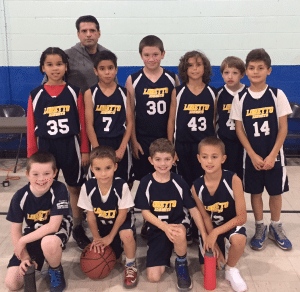 In Game 2 the boys were on fire from the beginning. Lincoln McCarthy and Owen Powers handled the point guard position brilliantly on both ends. They controlled the ball well on offense, made several shots and each had numerous steals that lead to easy baskets.

The big men were dominating as well. Bryce O’Halloran and Ryder Griffin owned the boards getting rebound after rebound. They also blocked a number of shots and each made 2 baskets. The end result was a convincing 22-8 Victory to christen their home court. This looks to be a solid team already and Coach Brian Maddox was happy and impressed with how well they played for a brand new team.