The advantages, and risks, of dry cask storage

In 2010, Kevin Kamps of the nuclear watchdog group Beyond Nuclear was invited to Japan to speak to residents who lived in the shadow of the Fukushima Daiichi Nuclear Power Plant. They were worried about what might go wrong at the plant because they had heard stories of things going wrong at other plants, specifically a smaller one on the banks of the Hudson River in New York.

The Indian Point forum, organized by The Journal News and Clearwater, was held at the Desmond-Fish Library in Garrison. Another is scheduled for the spring. 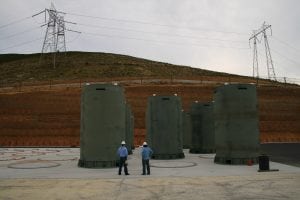 The small but ongoing leaks at Indian Point, which have been a source of contaminants in the groundwater that will have to be cleaned up, dwarf in comparison to what happened at Fukushima Daiichi less than a year after Kamps spoke there. The March 2011 Tohoku earthquake and tsunami caused three of the plant’s six reactors to melt down, initiating the worst nuclear disaster since Chernobyl in 1986. The residents to whom Kamps spoke about Indian Point now live in an abandoned school outside Tokyo. They may never be able to return home.

As horrific as the Fukushima disaster was, it was a hair’s breadth away from becoming much worse. And the culprit was the exact thing that the townspeople were worried about. Loss of power caused one of the spent fuel pools at Reactor No. 4 to overheat. Without a constant supply of cooled water, the heat from the spent fuel rods boiled away the water and kept heating up. But for reasons that remain unclear, a gate that separated water from the nearby reactor cavities also failed, causing water to rush in and refill the pool, preventing an even worse situation.

The incident at Reactor No. 4 is an illustration of why Kamps referred to spent fuel pools as mega-catastrophes waiting to happen.

“You have decades worth of irradiated nuclear fuel, all in one place, in a pool, and it has to be cooled 24/7/365,” he said in an interview. “When a reactor shuts down permanently, you can’t have a meltdown, which is great. But then all that risk goes into the pool.”

If the water in the pool were to disappear, either by a large leak caused by an earthquake, accident, or act of malice; or if a large-scale power failure caused the water to boil away, the fuel could catch on fire, releasing its full load of cesium-137 into the air.

Had that happened at Reactor No. 4 at Fukushima, the Japanese government would have enacted a plan to evacuate 50 million people from northern Japan. The Indian Point plant has no such plan.

The Nuclear Regulatory Commission, the federal agency that oversees U.S. nuclear plants, allows for spent fuel to be stored in pools indefinitely. But because the pools at Indian Point have run out of room, it must turn to another option: Dry cask storage. 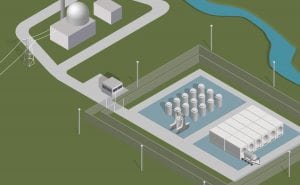 In that process, after the fuel rods have been cooled in pools for at least a year, they are transferred to casks made of concrete and steel. The casks are air cooled, so no electricity is required. As of August 2016, Entergy, which owns Indian Point, had filled 29 casks with spent fuel rods. Under a shutdown agreement negotiated with New York State, it must fill at least four dry casks with fuel each year until the plant’s pools are empty.

Stored outside, the casks are still vulnerable and require additional security measures. “Dry cask storage in the United States was not designed with a terrorist attack in mind,” said Kamps. At most plants, the casks are lined up like bowling pins, unprotected, making them vulnerable to attacks, according to federal testing, by anti-tank missiles or other weapons.

Kamps said a process called “hardening,” or surrounding the casks with an earthen berm, would provide at least some measure of protection. That’s what was done at the Prairie Island plant in Minnesota after public pressure. 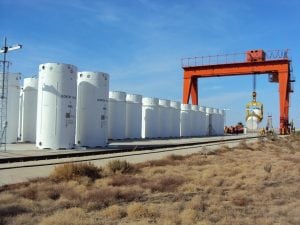 Another option, he said, would be to space them far enough apart that they could be camouflaged so they would be harder to identify, he said. Some plants also have partially buried the casks, leaving the tops exposed for cooling, That scenario, however, makes it more difficult to repair a cask if — or when — it fails. Most casks are designed to remain effective for 100 years, but the fuel inside will remain dangerous for millions of years.

All of which points to the underlying problem that every nuclear power plant in the country will face: Where will the waste go? Without a permanent storage site for spent nuclear fuel, decommissioned plants must continue to store their waste on-site indefinitely.

“It can’t stay where it is forever because these plants are on the banks of the Hudson River, or on sea coasts, on the Great Lakes shoreline,” said Kamps. “So it would eventually, if left alone, leak out. But hardened on-site storage, as an interim measure, until we can find a geological repository that is scientifically suitable, environmentally just and consent-based, meaning the host community agrees to serving that role — that’s the best we can come up with right now.”