Summer camp on Hudson shuts down

After countless nautical miles rowed, paddled and sailed, Building Bridges Building Boats, the summer boating camp for teenagers that has operated in Cold Spring for 20 years, will cease operations.

David Hardy, the camp’s executive director, said the nonprofit’s board voted at its Oct. 18 meeting to dissolve the organization. 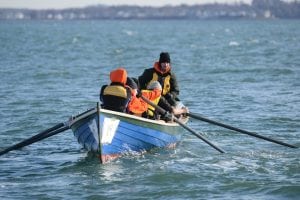 The BBBB team competes in an open-water rowing competition in Massachusetts in November 2014. (Photo by Damian McDonald)

For the hundreds of Philipstown teenagers who took part in its weeklong camps, the Hudson River became an outdoor classroom. The sessions put students on the river every day, where they gained firsthand knowledge about everything from seamanship and the geography of the river to an understanding of tides, weather and navigation — not to mention the fun and camaraderie.

Hardy declined to discuss specifics of why the camps were ending but said the board had struggled with how to reinvigorate the program.

The decision “wasn’t easy,” he said. “But we all agreed.” He added that “our board members have been amazing; many have stayed with us for years and years.”

Nick Groombridge, the board chair (and also a board member of Highlands Current Inc.), said “the organization has had a great run for more than 20 years, getting kids out on the river” but that “it’s time to move on for a lot of the people involved and we felt it would be better to go out on a high note rather than take the chance we wouldn’t be able to maintain the programs at that high level.” 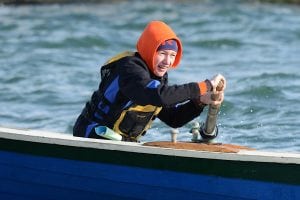 Lynn Rubicam, a former Cold Spring resident who served on the BBBB board for 13 years, wrote in an email that part of its legacy was in helping “people in the community strengthen their relationship with the Hudson River” and raising awareness about access to the riverfront. She noted it had been established as an alternative high school program but grew to involve families in a variety of river-based activities.

In addition to its camps for teens, the organization offered public rowing, canoe -building and other community initiatives.

“There was always something new, from our Tales from the Yardarm nautical readings to our high hopes for a permanent boat house at Dockside,” she recalled.

Hardy said one his “tiredest” memories is from 2008, when BBBB campers completed the Great Hudson River Paddle from Albany to New York City.

Stefan Carlson, who attended BBBB camps from seventh grade through high school, was part of that 11-day excursion. “As high school kids it was daunting to even think about, but we accomplished our goal,” he said. “It stands as one of my proudest accomplishments.” 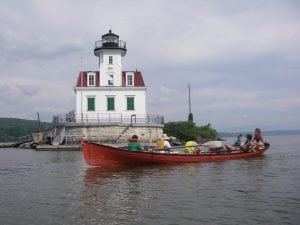 Campers pause near the Esopus lighthouse during a 2012 paddle from Albany to Cold Spring. (Photo provided)

For Carlson, the camps offered more than simply learning about boats and the river. “It absolutely had a major impact on my development as a person,” he said. “It was the first time I was truly thrust out of my comfort zone. Kids learned to get along, be respectful and work together. It’s not often that kids are forced to rely on each other like that, sometimes in very serious situations. “

In its early years, the organization built three 15-foot shad boats and a 26-foot gig; it also refurbished used vessels and borrowed crafts when needed. Campers participated in rowing competitions up and down the Hudson and in November 2014 won the Northeast Regional Youth Open-Water Rowing Championships (a.k.a. the Icebreaker) in Hull, Massachusetts.

The organization has also been known for its community service, especially its participation in the annual Great Hudson River Sweep. Other projects included gathering relief supplies for hurricane victims and assisting in making a local home handicap-accessible.

Hardy said the organization’s assets, including its boats, will be distributed among other nonprofits with similar missions. He said BBBB will likely close its books by next summer.

One thought on “20-Year Voyage Comes To End”