It’s impossible to place a value on the Hudson River or Mount Beacon, or the cultural significance of the city that lies between the two — or is it?

Municipalities in New York state are increasingly cataloging their environmental and historical assets through Natural Resource Inventories, and they’re being rewarded by the state for doing so. In Beacon, the city’s Conservation Advisory Committee, a panel of 10 volunteers (with two open seats) expects to complete its NRI next summer.

NRIs are generally comprised of maps and information about significant natural resources such as forests, streams, wetlands and rocky ridges. Cultural resources like historic, scenic and recreational assets are often included, as well. 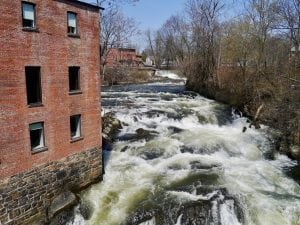 Would this Fishkill Creek corridor be considered a scenic resource? (Photo by J. Simms)

The state Department of Environmental Conservation promotes NRIs as essential for guiding municipalities as they update zoning codes or consider planning initiatives. The “big picture view” it provides is critical, the DEC says, but for city leaders the possibility of moving closer to the front of the line for state funding may be  equally important.

“NRIs can be a springboard for pursuing other conservation goals, such as updating a comprehensive plan or developing an open space plan, and funding is available to support these kinds of projects, including Hudson River Estuary Grants and Hudson River Valley Greenway Grants,” says Laura Heady, a conservation and land use coordinator for the DEC’s Hudson River Estuary Program. “The process of developing an inventory can also identify data needs for a community. While working on its NRI, the city of Kingston realized it needed a street tree inventory and subsequently applied for and was awarded a $50,000 Urban and Community Forestry Grant.”

Cities that develop an NRI are also eligible for grants of up to $100,000 from the state’s Climate Smart Communities program.

Another component of the Beacon report, a scenic resources inventory, is being completed by six students from Cornell University’s College of Architecture, Art and Planning, who visited the city in October. 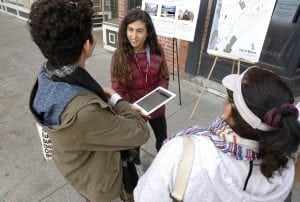 Sarene Shaked, a student at Cornell, explains the group’s work to passersby on Oct. 28 outside the Beacon Institute on Main Street. (Photo by Bill Staffeld/Cornell AAP College)

The group was charged with cataloging not only landscape features such as the Hudson and Mount Beacon but also cultural assets, which could include historic structures and other aspects of the city that are appreciated and enjoyed by the public.

In a preliminary presentation to the Conservation Advisory Committee (CAC) next week, the students will state that the protection of these resources should extend beyond Beacon’s boundaries, said George Frantz, a Cornell professor in the college’s Department of City and Regional Planning. 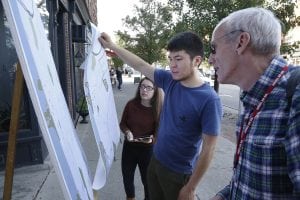 “It’s very interesting working in the Hudson River Valley because a scenic resource for a city or municipality often is not actually in that municipality,” Frantz said. “One of the defining bits of information is that it’s going to take inter-municipal cooperation to protect these places.”

As the Cornell students complete their work, the CAC is concurrently working to create maps that depict Beacon’s geology, water resources, wildlife habitat and land-use planning.

“We’re taking this information and interpreting it through the lens of the environment and hoping that the city will utilize it” when it makes zoning and other land-related decisions, explained Brian DiFeo, chair of the CAC.

The CAC plans to present its NRI to the public and City Council next summer. If the council adopts the plan, DiFeo said he hopes the CAC can begin work on a detailed open space plan.

Formed in early 2017, the Green Beacon Coalition sponsored Earth Day cleanups around Beacon. The plan for 2018 is to put on a “proper mini-festival” as residents clean up Mount Beacon, the Fishkill Creek and Hudson River banks and other spots, DiFeo said. The group also hosts Environmental Citizen Soapbox events where residents share ideas related to the environment, conservation and sustainability.

In 2017, the CAC sponsored the launch of Energize Beacon, part of the nonprofit Energize NY network created to increase energy efficiency. Homeowners can sign up at beacon.energizeny.org for a free energy assessment and to learn if they qualify for subsidized home improvements.

Because Beacon is under a Stage 1 drought alert, the CAC posted a list of water conservation tips at beaconny.gov. Recommendations include turning off the water after you wet your toothbrush and, to check for leaks, reading your meter before and after a two-hour period when no water is being used.