Putnam County is joining more than 100 other counties and states in suing drug companies that it claims contributed to the opioid addiction crisis through “fraudulent and negligent” marketing and careless distribution of pain pills.

During the county’s Nov. 15 Rules Committee meeting, Neal Sullivan (R-Mahopac) cited a 60 Minutes–Washington Post investigation in October that detailed how the drug industry lobbied a handful of members of Congress to weaken regulations designed to prevent large shipments of opioids to corrupt doctors and pharmacists.

The report also noted the pharmaceutical industry has spent $102 million lobbying Congress between 2014 and 2016.

“It is a clear indication [the pharmaceutical companies] are in it for the money,” Sullivan said. “They’re killing 91 people a day who overdose. We’re going to join this lawsuit to put some pressure on these companies.”

Barbara Scuccimarra (R-Philipstown) said she was pleased the county is moving ahead. “It’s not just to get monetary payback for what we’ve expended,” she said. “It’s to send a message to these companies that it’s time to change the way you do business.”

There is precedent for holding large corporations responsible for downplaying the health effects of their products. In 1998, 46 states settled with the tobacco industry for $200 billion after arguing manufacturers had covered up the risks of smoking.

“As president of the New York Association of Counties, I think it is imperative that we learn from the tobacco lawsuits of the 1990s and collectively go after the source of the prescription opioid epidemic,” said County Executive Mary Ellen Odell in a statement. 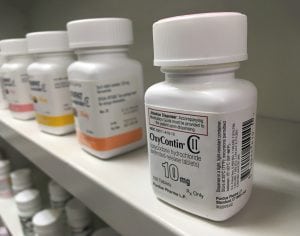 Purdue Pharma, which makes the painkiller OxyContin, has been sued by multiple counties. (Shutterstock)

Putnam County Attorney Jennifer Bumgarner noted the lawsuit was not part of a class action but rather one of many individual suits filed by counties and states. In June, Dutchess County sued 11 pharmaceutical companies, and Orange, Rockland, Westchester and at least eight other New York counties also have sued as part of a coordinated effort called the New York Opioid Cost Recovery litigation.

In addition manufacturers and distributors, looking for evidence they knew of the risks of addiction to pain pills. Most recently, officials in four towns in West Virginia sued a nonprofit that sets standards for hospitals, arguing it had spread “misinformation” beginning in 2001 in its directives on using opioids for pain management.

The challenge for plaintiffs is that opioids are not tobacco. People who abuse prescription opioids, which are approved by the FDA for pain relief, are not using them as directed and taking more than prescribed (unlike cigarettes, which people do use as designed). In addition, most marketing is aimed at doctors, not the user. Like gunmakers, the drug companies and distributors likely will argue that people, not its products, are responsible.

Bumgarner said the lawsuit will not cost the county anything, because the firm that many neighboring counties have hired, and which advised Putnam officials — Napoli Shkolnik, based in New York City — is working on a contingency basis, meaning it will be paid from any settlement.

“They have absolutely agreed to provide us the resources, and that they will do the legwork and look through the documents themselves,” said Bumgarner.

The Legislature met Nov. 21 to approve the lawsuit, which seeks damages for “deceptive acts and practices, false advertising, public nuisance, fraud and unjust enrichment” from the “largest manufacturers and marketers of opioid pain medications,” such as Purdue Pharmaceuticals, Teva Pharmaceutical Industries, Johnson & Johnson and Endo Pharmaceuticals; as well as the largest distributors, which are McKesson Corp., Cardinal Health and AmerisourceBergen.

According to the resolution, the goal of the litigation is to compensate the county for costs incurred from prescription opioid abuse, including loss of productivity in the workplace, health care costs such as treatment, and criminal justice costs.

But Legislature Chairwoman Ginny Nacerino (R-Patterson) said the chief objective of the litigation isn’t financial. “We don’t anticipate receiving a lot of money,” she said. “But it is important to send a message. It is important to stop what has been going on for so many years.”

Paul Jonke (R-Brewster) called the litigation a good first step, saying the lawsuit and others like it send a message to drug companies “that we’re going to hold them responsible for the crisis they’ve created in our little community. Hopefully they’ll see some financial obligation down the road, or we’ll be able to recoup some funds for education, and get some folks help.”