Work will be delayed at Butterfield site

Putnam County is faced with a setback in the construction of a senior center at the Butterfield site in Cold Spring because the bids for the work came in much higher than expected.

Last year the Legislature approved an $800,000 bond referendum for the initial costs of retrofitting space inside the Lahey Pavilion at the former hospital site. It plans to lease 6,000 square feet from the developer for 15 years at a cost of about $4.5 million, including rent, taxes, common charges and costs. 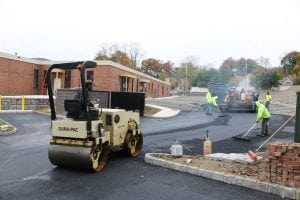 Crews repaved the parking lot behind the Lahey Pavilion on Nov. 7. (File photo by Michael Turton)

Barbara Scuccimarra (R-Philipstown) said at the Nov. 22 Physical Services Committee meeting that the county received three bids to complete construction for the senior center, and that the lowest was $1.8 million.

She said the county would re-bid the project. That will delay progress at least 30 days, she said, although the center is still expected to open in the spring.

“When the price comes in high, what else can you do but look at the scope again and re-bid, or change the direction of the project?” she asked.

The county’s Highways & Facilities Department completed the demolition work in the Lahey space, which Scuccimarra said may help reduce bids. She noted that construction at other projects in the eastern part of the county, such as at Tilly Foster Farm in Brewster and the Putnam County Golf Course in Mahopac, was done by county employees to reduce costs, and asked why this can’t be done at Butterfield. 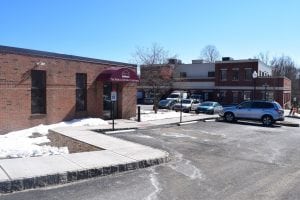 The Lahey Pavilion, in foreground (File photo by Michael Turton)

“I would like to see the county do more,” she said.

John Tully, deputy commissioner of Highways & Facilities, said the county was reviewing the project plans to see if any areas were overdesigned; the second look may also reduce incoming bids.

He added that location may add costs if the county sends workers to Cold Spring. “Tilly Foster was easy because all of our guys report to this side of the county; it’s in our backyard,” he said. “It’s a little remote over there.”