Which came first — the chicken or the … dog?

In Chantelle Norton’s case, it was the feathers. She lived with a flock of chickens, and later with a Boston terrier adopted from the friend of a friend. In both cases, her surprise at the bonds she formed with the animals, and their distinctive personalities, led to a visual exploration of the interactions.

The oil paintings, drawings and giclées that resulted are on exhibit at the Theo Ganz Studio in Beacon through Jan. 28 as an exhibit called Dog Days. A collection of Norton’s chicken portraits, Brood, was shown there in 2013. 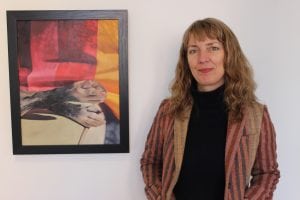 Chantelle Norton, with Dog Days of Summer (Photo by A. Rooney)

The terrier was named Lulu. It was the first dog Norton ever owned and she found she “wanted to document the tenderness” that develops between animal and owner. She also was captivated by paws. Her paintings at Theo Ganz show them stretched out against a backdrop of patterns from bed linens, blankets and rugs — intimate “glimpses into the fabric of a home.”

A dog “links one to home by insisting on rituals of daily walks, sniffing out the smells of local terrain and beasts, their sleeping arrangements and their feeding,” she says. “Yet I’ve never lost sight that they are animals; they don’t speak our same language.” 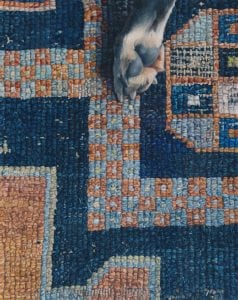 Paw on Rug, by Chantelle Norton

Norton says it was hard for her to put these feelings into words, which is why she painted them instead. “In my experience with Lulu, I not only got interested in the bonds, but in how dogs get trained to be companions, or to round up other animals, or hunt,” she says. “I got interested in how they developed as breeds and how humans have altered them for their purpose.”

As an artist, she also found herself intrigued by the “variations of looks, from the little hairless dogs to St. Bernards, Chihuahuas to wolfhounds,” as well as their role in early history and mythology.

Born in Ireland to an Irish father and an American mother, Norton was raised in both countries. “I always knew that I wanted to create,” she says, “It was more like, in what way? And, what do I want to say?” 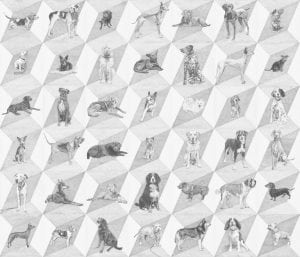 The Pack, a giclée print by Chantelle Norton

She attended the Rhode Island School of Design for a year, couldn’t continue for lack of funds, took a year off, then enrolled at the School of the Art Institute of Chicago. After a year there, she moved to Dublin, studied for a year at the National College of Art and Design, then returned to the Art Institute, where she completed her bachelor’s degree in fine arts. She also has an associate degree in fashion design from Parsons and worked for years as a freelance designer for Henri Bendel.

Norton and her partner, Dan Dobson, a musician, came from Brooklyn to Philipstown 10 years ago, when they began renting a property over the winter. It was during one of these stays that they were introduced to chickens as providers of eggs and destroyer of ticks. “They are remarkable little creatures,” Norton has written, praising their “perfect combination of beauty and utility.” 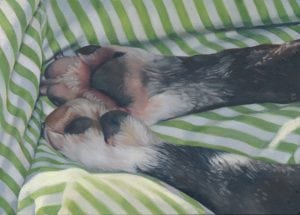 To prepare her poultry series, Norton photographed the birds, then transferred sketches to plates for etchings. (Chickens are “perfect subjects because using fine lines really captures them,” she says.) She also reproduced the images on ceramics, and it was at a Garrison Art Center pottery show that Eleni Smolen of Theo Ganz saw them and suggested a show.

Norton, who now lives on 11 acres in Kent, mixes freelance design work with commissions. “Pigs, goats, I’m open to anything,” she says with a smile.