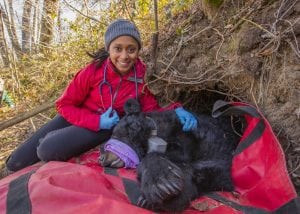 What drew you to black bears?

I had been studying conflicts between humans and lions in Tanzania, but it’s hard to study an endangered species for a long time. Although there aren’t a ton of black bears in North America, in many places they are rebounding.

What is the biggest misconception about the bears?

That they are ferocious. Black bear attacks are rare and rarely lethal. Black bears are much more likely to retreat.

What should a hiker do if he or she encounters a black bear?

Retreating is the best idea. But if you feel threatened, make yourself big. If you have a jacket on, hold it above your head to look tall. Back away slowly and speak in a low and resonant voice. What we usually say when we encounter a bear is, “Get out of here, bear!” It sounds ridiculous, but that’s what we say. At the same time, don’t make eye contact. Predators always make eye contact with prey.

You took 60 high school students from New York City to camp at Black Rock Forest for a week. What was that like?

It was profound. I’m also a city kid and wasn’t introduced to the outdoors until I was an adult. I enjoyed watching students transform from fearful to having a great time. By the time we finished, the students had handled turtles, snakes, millipedes and birds. They’d taken night walks without flashlights and seen amazing views of the Hudson Valley. It’s powerful for me to see these kids who are a lot like me go through this experience.

What could be done to get more people of color into conservation science?

There’s a lack of awareness that it can be a career path. That’s what I went through. I knew the environment existed, and I thought it was cool, but I didn’t know of any examples of people like me who did science in nature. I thought science was done in a lab. Conservation is a mission-driven field. We’re trying to save the environment, and it’s not going so hot right now. But there are reasons to believe that a diverse group of people working on environmental problems, with diverse backgrounds, perspectives and ideas, will be more likely to solve problems than a homogeneous one.