The Blue Devils will be tested this year. Haldane’s starting backcourt graduated last June after an 18-win campaign that reached the regional final in the state tournament. 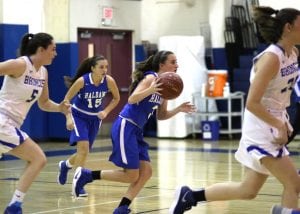 Haldane would like to play fast. When the Blue Devils are at their best they are moving the ball quickly up the court before the defense can set up and getting the ball inside to senior Allison Chiera. Defensively, Haldane likes to extend to full-court pressure.

In its first game of the season, on Dec. 5 at Bronxville, Haldane was successful in the first half with its game plan, storming to a 28-14 lead. But in the second half, the Blue Devils couldn’t find their rhythm. Early-season fatigue set in and Haldane lost the momentum that its defense and rebounding provided in the first half. 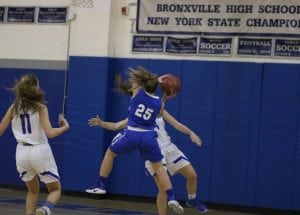 Haldane will depend on Abbey Stowell (25) to make plays. (Photo by Scott Warren)

Bronxville handled the basketball much better after the break and Haldane didn’t get the same open looks from the perimeter. Bronxville gutted out a 38-36 win by attacking the Haldane zone and holding the Blue Devils to only eight second-half points. Still, Bronxville needed to block a late Haldane shot and force a turnover to seal the victory.

Chiera, who after last season was named a third team All-State selection, is the focal point of the offense. Gone is Hannah Monteleone, but in are her two sisters, Livy and Bela, as starters. Livy, who is active on the glass, is a good interior passer and had seven points in the first half. Bela logged her first varsity minutes and will look to build upon them. 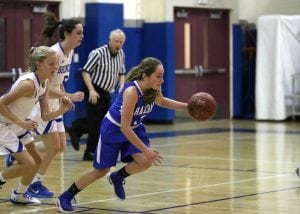 Olivia McDermott and Abbey Stowell lead the defense. A sophomore, McDermott, is a lights-out three-point shooter, most comfortable on the catch-and-shoot. She led Haldane with nine points at the half. A standout in the pentathlon, Stowell has many duties on the basketball team, as well, as the primary playmaker.

The Bulldogs opened their season on Dec. 5 at Walter Panas High School with a 41-24 loss. 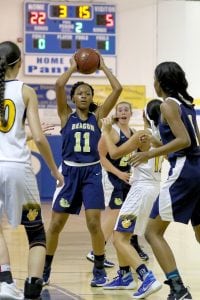 This season the Bulldogs will be led by senior Brianna Dembo, who scored 15 of the team’s 24 points at Panas. “Bri is a strong returner, she’s our leader,” said Coach Christine Dahl, who is in her 16th season at Beacon.

The sophomores who had varsity minutes last season will need to step up, Dahl said. “They are learning as they go,” she said. “They will get better.” 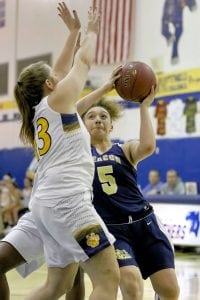 Enita Rodriguez (5) drives to the basket against Panas. (Photo by Richard Kuperberg Sr.)

Sophomore Skyler Kurtz will play an important role as a playmaker, ballhandler and defensive stopper. Sarah Evans provided a spark for Beacon with strong interior play at Panas, scoring six points in her first varsity minutes.