BeaconArts, the nonprofit created to champion the city as a center for arts and culture, is celebrating its 15th year with an exhibit at the Beacon Institute on Main Street that highlights the many projects and events it has supported. 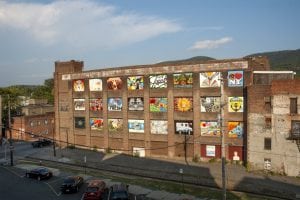 In 2010, 24 artists created murals for the windows of an abandoned factory in Beacon for a temporary gallery called Electric Windows. (Photo by Daniel Weise)

“We’ve always been this ad hoc marketing and tourism entity, focused on the arts and on business,” says Kelly Ellenwood, who in January will step down as president of the group, which has 116 artist and 90 business members. “Now we’ve become more like a council, focused on more than just the arts.”

Curated by Kalene Rivers with help from Ellenwood, the exhibit continues at 199 Main St. through Second Saturday in March, with the exception of Jan. 8 to 25, when the space will be closed for Beacon Institute activities. A central feature is an extensive timeline that fills one wall of the space. The rest of the room has photos, scrapbook archives and objects. 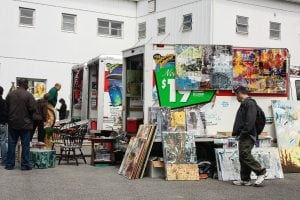 From 2010 to 2015, the epicenter of Beacon Open Studios was Truck City, where artists created mini-studios in rented U-Hauls. (Photo by Linda T. Hubbard)

Ellenwood says, for her, browsing the exhibit induces “huge flashbacks and great memories. It’s all documented now; it’s archived and it’s important that it is.”

While BeaconArts was created before the arrival of Dia:Beacon, it was Dia that “made Beacon a place to come to,” she says. “Also, our Main Street is unique. It’s very long, for a Main Street, because contemporary Beacon was created out of two villages, each with their own center, coming together. So many people know each other, and Main Street is a spine which keeps us connected.” 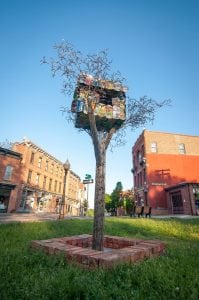 Pop Culture, by Insun Kim, was displayed along Main Street during Beacon 3D in 2014. (Photo by Michael Kriegh)

Rivers says her goal putting the exhibit together “was to represent a little snippet of what it might have felt like to actually be at one of these past events. Luckily a lot of great photographers were there.

“We also looked for projects that could be represented by artwork,” she says, such as guitars from RiverFest, sculptures from Beacon 3D, a concept design sketchbook and maquette study from the River Beacons mural, a piano from Keys to the City, sculptures created at the HEFeSTUS iron pour, an owl mural from Electric Windows and totems from Two Row Wampum. 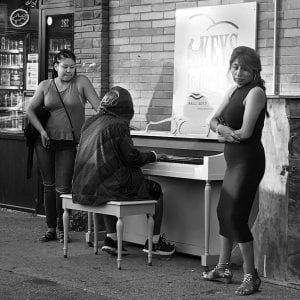 Keys to the City, which debuted this year, placed pianos around the community, such as this one at Key Food. (Photo by Rob Penner)

There’s also a listening station for Freedom and Truth, a musical composition commissioned by BeaconArts for the dedication of a marker in 2016 honoring American journalist and women’s rights advocate Margaret Fuller (1810-1850).

Finally, on Second Saturday in December, February and March, BeaconArts will screen documentaries about its projects and artists. On Dec. 9, at 7 p.m., the selection will be Electric Projected by Cary Janks and Dan Weise. 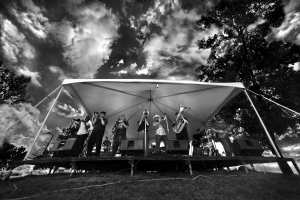 Over the years, BeaconArts provided funding for a variety of projects, including Second Saturday, Beacon Open Studios, the Beacon Independent Film Festival, Beacon 3D, the Bicycle Christmas Tree and Menorah, Windows on Main Street and, most recently, the Bus Shelter artwork project. The group also has a website at beaconarts.org to promote events and prints a map of Beacon distributed through its members four times a year.