It was four years ago that Joanne DeVito, who spent 14 years living in and raising her children in Rockland County, received a call from her eldest daughter with surprising news.

“She said to me, ‘Mom, they found a lump in my throat,’ ” recalled DeVito. Her doctor suspected thyroid cancer, but DeVito was skeptical. “I told her ‘We don’t have any thyroid cancer in our family.’ ” Three days later, the diagnosis was confirmed. Over the next month, DeVito’s two other grown daughters called to say they also had thyroid cancer. So DeVito called her own doctor.

“I said, ‘You’re not going to believe this,’ ” said DeVito. “She said, ‘You better come in.’ I live an extremely healthy lifestyle. I’m a yoga teacher and an organic gardener. But sure enough, I had it.”

DeVito’s doctors couldn’t explain why thyroid cancer suddenly befell her family. But a peer-reviewed study by Joseph Mangano and Janette Sherman of the Radiation and Public Health Project published on Nov. 17 in the Journal of Environmental Protection, suggests that researchers look 8 miles upriver from DeVito’s home, at the Indian Point nuclear power plant. 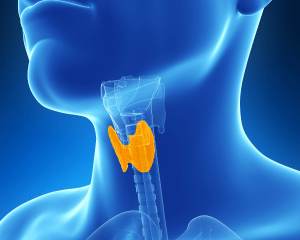 A depiction of the thyroid gland

Thyroid cancer is the fastest-growing cancer in the U.S., with national rates tripling since the early 1970s. Shaped like a butterfly, the gland is located at the front of the neck just below the larynx (voice box). It produces hormones that regulate the rate at which the body uses energy, as well as functions of the heart, digestive tract, muscles, brain and bones.

More accurate diagnoses of the cancer account for some of the rise, but researchers believe there may be other factors. The disease affects women at a higher rate than men, for reasons that are unclear. Certain genetic mutations could be a factor. The only widely accepted root cause is exposure to ionizing radiation, such as from long-since outlawed medical procedures involving head and neck irradiation and fallout from nuclear attacks and meltdowns.

Survivors of the atomic bomb blasts at Hiroshima and Nagasaki suffered from high rates of thyroid cancer, as did survivors of the 1986 accident at Chernobyl. A 1999 study by the National Cancer Institute suggested as many as 212,000 Americans may have developed thyroid cancer as a result of the above-ground nuclear testing in Nevada in the 1950s. Mangano and Sherman’s study examines the hypothesis that low-level doses of iodized radiation from both planned and unplanned releases of radioactive steam when the Indian Point reactors shut down for refueling or emergency measures play a role.

Has Your KI Expired?

The federal government has recommended since 2001 that residents who live within a 10-mile radius of the Indian Point Energy Center (the “Emergency Planning Zone”) keep a supply of potassium iodide tablets, known as KI, on hand.

Should there be a major leak at the nuclear plant, each tablet prevents the thyroid gland from absorbing radiation for 24 hours. It does not protect other organs. The tablets are not recommended for adults over the age of 40 as that group has the lowest risk of thyroid cancer. Fetuses and infants are the most at risk.

The Putnam County Bureau of Emergency Services distributes the pills. (If you have a supply, it should be replaced if expired. The old tablets can be safely discarded in the trash.) Tablets are available from the Philipstown Town Clerk at 238 Main St. in Cold Spring on weekdays from 8:30 a.m. to 4 p.m. Call 845-265-3329.

Although this is the 37th study that Mangano has written or co-written, some of his work has been criticized as “junk science,” notably by Entergy, which owns Indian Point, and Popular Mechanics, which in 2014 documented flaws in two papers, including one that suggested that fallout from the 2011 nuclear accident at Fukushima led to 14,000 deaths in the U.S.

However, the thyroid cancer study is quick to point out possible flaws in its own hypothesis. For one, it’s possible there are other, unknown causes besides radiation that could be responsible for the local increases. The study also acknowledges that because Indian Point does not measure the amount of waste products emitted during ventings, it’s difficult to know exactly how much ionized radiation is released.

Mangano hopes that the study will lead to better data being collected, and for other researchers to conduct similar studies near other nuclear plants for comparison.

While the cause of the local increase in thyroid cancer is the subject of debate, the increase is not. Susan Shapiro, an environmental attorney who serves on the board of the nonprofit Radiation and Public Health Project, suggested that residents ask to be checked for thyroid cancer annually by their doctor or dentist. She also suggested keeping a supply of potassium iodide pills on hand, which can be taken during a radiation emergency to protect the gland.

If detected early, the 5-year survival rate for thyroid cancer is over 98 percent. But it leaves the immune system compromised, as DeVito and her daughters have learned. “They say it’s a good cancer,” she said. “I’m not finding it so good.”

Leaving Waste High and Dry
Where Will the Jobs Go?
People Power
Hard Lessons From Zion