The Desmond-Fish Library in Garrison has hired a new digital services coordinator and plans by March to open an innovative technology lab on its lower level.

McCluskey, who held the title of cybrarian, was a force in bringing computer education to the library. She taught classes and labs, offered weekly tech support to patrons, and founded a robotics club and Project Code Spring, an afterschool program that became so popular it had to stop accepting participants for lack of computers and data capacity, said library Director Jen McCreery.

The momentum from these programs led to the Innovation and Learning Center, under construction in a space formerly used by the Friends of the Desmond-Fish to store used books for its annual sale.

The center was funded through donations, state grants and contributions from NewYork-Presbyterian Hudson Valley Hospital, the Cold Spring Lions Club and the library’s trustees, McCreery said. More than $175,000 has been raised, with another $10,000 to go and a matching grant in place through Dec. 31.

Biracree envisions the space serving not just Garrison but the region, with the goal of making digital and cultural literacy more than “a privilege for people who can afford to be a part of it,” he says. “There’ll be all sorts of instruction, from how to use those new devices you got during the holidays to password management, along with weekly meetings for adults to introduce technology — everything from Snapchat to learning what exactly Russian hackers are. We’ll also have a weekly work-from-home coffee house. 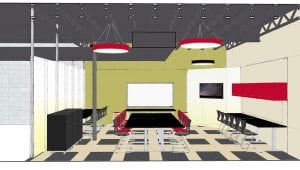 A design by Janko Rasic Inc. of the new technology center at the Desmond-Fish Library (Image provided)

Project Code Spring will continue and, if there’s a demand, a session specifically for girls will be offered, he says.

Biracree sees the Innovation and Learning Center compelling children and teenagers to interact with not just machines but each other.

“Space like this won’t leave kids enslaved to social media or video games,” he says. “Most people will be working on projects and opening ways of thinking that they never had before. We’ll take a toy apart, do circuit-bending and work with kits.

“Kids now are using video games to make things and explore new worlds. They’re not always fighting zombies — they’re building simple machines and they’re networking, working together. It can look like fiddling around but it’s actually designing, building and problem-solving.”

Here is a sampling of what the Innovation and Learning Center at the Desmond-Fish Library in Garrison plans to offer:

3-D printers, printing services and a 3-D scanner
A recycler that turns plastics into 3-D printer raw material
High-end digital equipment for drawing and moviemaking
High-end video and photo software
A recording studio
Three green screens, including one for stop-motion
A robotics studio and flooring in a pattern easily recognized by robots
Two walls to display panel-light programming
An interactive whiteboard for videoconferencing
A head-mounted Google Glass
An Oculus virtual-reality headset


Biracree, who lives in Beacon with his wife and their 2-year-old daughter, is a graduate of Bennington College, where he double majored in poetry and computer music. “There was a lot of production work involved,” he says of the latter. “We built a big machine out of old toys soldered together and used mathematics to create music.”

Before attending Sarah Lawrence to earn a master’s in poetry, Biracree was employed at the American Academy of Poets, where he helped maintain its website and directed an audio archives built from 75 years of reel-to-reel tapes. 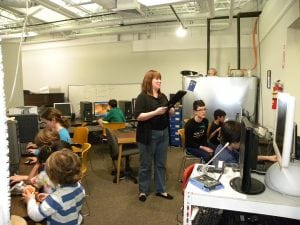 Before coming to Desmond-Fish, Biracree taught literature at the College of Mount Saint Vincent in the Bronx, where he says he observed students using technology in ways that were “inner extensions of their thoughts and selves,” he says, although they didn’t always seem to realize it.

For more on the plans, see desmondfish.wixsite.com. The Innovation and Learning Center will have the same hours as the library.