Installed at riverfront in Peekskill

A ceremony was held at Charles Point in Peekskill on Dec. 2 to dedicate a sculpture honoring Hudson River Sloop Clearwater, the vessel that launched an environmental movement led by folk singer Pete Seeger. 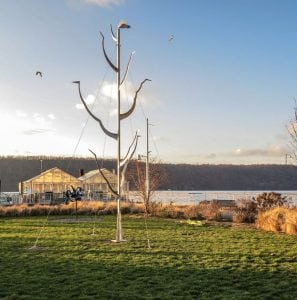 North Star, a sculpture by Al Landzberg, before its move to Charles Point (Photo provided)

The 24-foot North Star was made by Al Landzberg of Yorktown Heights with a sailboat mast salvaged by his son-in-law, Chuck Newman, from a discarded boat at the Peekskill Yacht Club. Initially installed in Yonkers, the piece was moved to Charles Point in May and donated to the city.