On Dec. 12, the Beacon boys’ basketball team lost at Ardsley, 73-65, dropping its record to 0-2. The Bulldogs battled foul trouble but came back from a double-digit deficit late in the game.

Last season Beacon finished 8-14 after its first seven wins were forfeited due to an ineligible player. This year the team is adjusting to the departure of key contributors Alex Benson, Andre Davis, Dionte Komisar and Branden Evans. 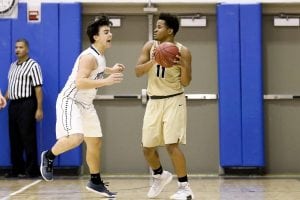 Manny Garner (11) of Beacon looks for an open teammate while a defender appears to yell at the ball during the Bulldogs’ loss at Putnam Valley. (Photo by Richard Kuperberg Sr.)

Beacon’s starting guards are juniors Aaron Davis and Manny Garner, who scored 19 in the Bulldogs’ opening loss at Putnam Valley on Dec. 6. He was saddled with foul trouble against Ardsley, limiting his contribution to five points.

Davis had 23 points against Ardsley, including 11 in the fourth quarter as Beacon clawed back into the game.

Senior Jemond Galloway controlled the paint against Ardsley and will be counted on to continue to do so. A standout last season, Galloway scored 20 and will bea focal point in opponents’ scouting reports. Nursing a one-point lead at the half, the Panthers went into a zone that limited Galloway’s touches. 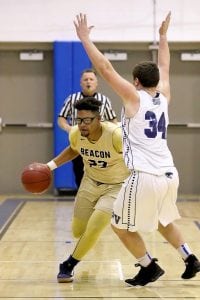 Demetrius Galloway (23) drives around a defender during Beacon’s game at Putnam Valley on Dec. 6. (Photo by Richard Kuperberg Sr.)

The challenge Beacon faces is whether the team will play fast, limiting Galloway’s impact, or settle into a half-court set to get the ball inside for post-up opportunities. There are few players in Section 1 with his size.

Down 51-39 after the third quarter, Beacon was forced to extend the defense and look for three-point shots, which took Galloway out of the flow.

Senior DaSean Turner is another important player for Beacon. He struggled against Ardsley but scored four points in the fourth.

Coach Scott Timpano says the teams to beat in the league this season will be Hendrick Hudson and Poughkeepsie. “We want all of our players to leave the program as better people than when they entered,” he says. “If a push to the sectional final happens along the way, we will gladly embrace it.”

The Bulldogs play Woodlands tonight (Dec. 15) at 6:15 p.m. in the Terrence Wright Memorial Basketball Tournament at Beacon High School. The consolation and finals are at 10 a.m. and noon on Dec. 16.

Two years removed from consecutive appearances in the state Class C finals, and following a 7-14 season in which the Blue Devils lost to Hamilton in OT in the sectional quarterfinals, Coach Joe Virgadamo is hoping for “tough, scrappy and disciplined defense” from his 2017-18 squad. 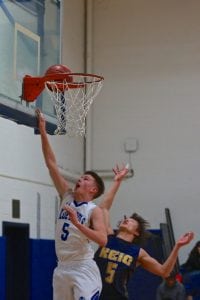 Virgadamo, a Haldane graduate who is in his 12th season as head coach, lost center Blaine Fitzgerald to graduation but returns a solid core with senior Nick Dipalo, sophomore Matt Champlin and sophomore Alex Kubik.

His goal, as it is every year, is to get the team to the Westchester County Center for the sectional finals, although in 2018, at least, the tournament will be held at Pace University. Last season was the first time in nine years the Blue Devils did not make the trip. “We need to get back,” Virgadamo said. “Anything can happen there.”

Although he notes the school has a strong junior varsity program, he says it’s important that young players learn man-to-man defense. “The focus should be on fundamentals,” he says. “Most players aren’t where they need to be. Athletes can work on their skills by themselves. There are so many resources for them now on the internet, there are no excuses.”