Two Brewster men were arrested on Dec. 8 and charged with heroin trafficking following an investigation by county and federal law enforcement officers.

Francisco R. Osorio Sagastume, 18, was taken into custody after being pulled over by Putnam County Sheriff’s deputies and investigators as he drove in the village. Deputy Sheriff Christopher Irwin and his K-9 partner, Kato, assisted in searching the vehicle and reported finding a kilo of heroin.

Eduardo Paiz-Ortega, 21, was arrested later that evening when authorities went to his apartment with a search warrant. Officers said that during a search they discovered another kilo of heroin.

The combined quantities of heroin seized have an estimated street value of $200,000, police said. Investigators believe it is one of the largest seizures of the heroin recorded in Putnam County.

The defendants face charges of criminal possession of a controlled substance in the first degree, a class A-I felony that could be punishable by up to 20 years’ imprisonment upon conviction.  The investigation is continuing and additional charges are expected. 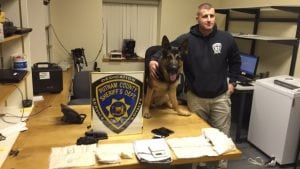 Deputy Irwin and K-9 Kato with the heroin seized in the case. (Sheriff’s Department photo)