Airing new information and old arguments, the public hearing on a cell tower proposed for Vineyard Road off Route 9 in Philipstown continued last week and will resume again in January — briefly — before the Philipstown Zoning Board of Appeals (ZBA) votes on the project.

After applicant Homeland Towers declined to delay a federally mandated deadline for the ZBA to make its decision, the panel extended its public hearing for an additional hour on Monday, Jan. 8, and scheduled a vote for that same evening. It instructed residents to submit comments by Friday, Dec. 29.

(Coincidentally, on Jan. 4, the Nelsonville Zoning Board of Appeals intends to continue its public hearing on a separate Homeland Towers proposal for a cell tower on Rockledge Road overlooking the Cold Spring Cemetery. The federal deadline on that review is also Jan. 8.) 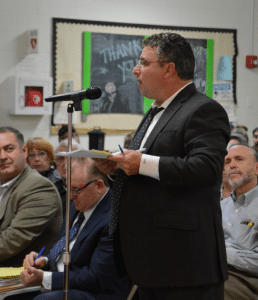 Andrew Campanelli, an attorney for residents who oppose the tower, speaks at the Philipstown public hearing. (Photo by L.S. Armstrong)

The Philipstown ZBA announced its plans on Dec. 11 at a hearing held at the Philipstown Recreation Center following a sometimes heated session that lasted more than three hours. It again drew a crowd of residents who far outnumbered the Homeland Towers delegation.

In partnership with Verizon Wireless, Homeland Towers wants to construct a 140-foot tower on 64 acres slightly south of the intersection of Routes 9 and 301. Vineyard Road ascends to a dead end from Route 9 and leads to another dead end, Round Hill Road.

Under federal rules, municipalities must either deny or approve cell tower applications within 150 days. Homeland Towers submitted the application last summer, though it has since made changes, such as reducing the tower height from 180 feet to 140 feet. Along with a special-use permit from the ZBA, the project needs a wetlands permit from the Conservation Board, the ZBA’s partner in the public hearing.

The tower site is not far from Mekeel’s Corner, which already has a 19-year-old, 100-foot cell tower that Homeland Towers deems unsuitable for upgrading.

According to Robert Gaudioso, Homeland Towers’ lawyer, the Mekeel’s Corner tower “doesn’t work from a radio-frequency standpoint” and even if it were upgraded “a significant gap in service” would remain. The tower also “was not constructed to be doubled in height,” he said.

Robert Dee, the ZBA chairman, reiterated that his board would consider a variance for a higher tower at Mekeel’s Corner, which it sees as preferable to a new tower. 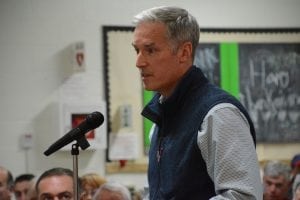 Allen Jordan addresses the Philipstown ZBA and Conservation Board about a cell tower proposed near his home. (Photo by L.S. Armstrong)

Gaudioso noted that if Verizon moves its equipment to a new tower at Mekeel’s, the old tower may continue to operate. Homeland does not own the existing tower, and it’s not known, he said, if the company that does own it, Crown Castle, would keep it operational or cooperate with Homeland Towers and Verizon in installing a new tower to serve multiple carriers.

Andrew Campanelli, a lawyer representing residents who oppose the new tower, asserted that Homeland Towers wants a new structure because Verizon could make its own deal with Crown Castle to build a higher tower at Mekeel’s Corner, cutting Homeland Towers out of the deal.

Like other critics, he questioned the need for a new tower and claimed that “Verizon’s own website says it has absolutely no gaps in the precise area” where Homeland Towers says one exists. “You have seen zero direct evidence from Verizon that it has a gap in any type of service whatsoever,” he told the boards.

Campanelli also said Verizon’s standard is a call-completion rate of 98 percent or better, although federal telecommunications law does not require that level and “does not guarantee seamless coverage.”

Homeowners near the Vineyard Road site have reported no problems with wireless service and said driving tests reveal the same lack of difficulties. ZBA Member Vincent Cestone similarly said tests conducted from his car found no service lapses, even for streaming videos.

But Gaudioso called such reports “anecdotal and unreliable.”

In addition, Campanelli cautioned that, by law, a tower’s height later can be increased, so that while Homeland Towers cropped 40 feet from the Vineyard Road tower, it could add 25 feet or more in the future.

He told the board that an “adverse aesthetic impact” of a cell tower on residents’ properties “is perfectly logical and legal grounds to deny the application.”

Allen Jordan, who lives on White Rocks Lane, said the Vineyard tower would be an intrusive presence looming over his house and expressed fears for its effect on the natural surroundings, including a stream already prone to flooding, and on his children. He predicted it will also prove “devastating” to his property values, adding that “I can’t imagine that for a lot of people in this room it’s not going to be devastating as well.”