Foodtown has a new identity as an art gallery, with the first of four exhibits by Haldane sixth-graders enlivening the backs of the display cases that dominate the front windows.

Angela Branco, in her first year as Haldane’s elementary and middle school art teacher, assembled 13 paintings and collages by her first-quarter students on a broad range of topics, from the supermarket itself to cows, dragons, Tic Tac containers, pre-adolescent questioning and “hodgepodge.” Each work was done on a 12-by-18-inch sheet, and some were joined to make larger pieces. Most artists provided a statement about their work, and these are displayed, as well. Some students collaborated. 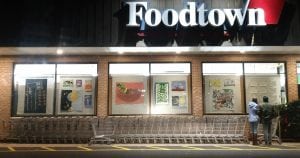 Branco says the only parameters were that the works must be flat and couldn’t resemble advertising. New artwork will be hung at the store when Branco has her next group of sixth-graders, which is every 10 weeks.

According to Rachel Emig, a Haldane parent and Arts Booster club member who coordinated the installation, “it took some time to come up with a user-friendly design for that space, as the shelves [against the windows] are not able to be moved.” The group went with a hook-and-clip system that makes it easy to change the panels. 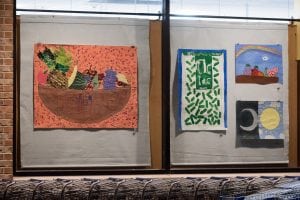 Besides donating its window space, Foodtown has been supportive of the project in other ways. For example, Paul Satkowski, the manager of the Cold Spring store, visited the school to be interviewed by the students.

“They were asked to treat this as a commission they were designing for a client,” Branco explains. She sees the gallery as “a great way to get the artists into the real world, and also to see there’s an audience for their art. 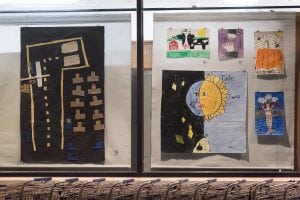 “Most of these kids are ready to make work independently,” she adds. “I’m trying to foster an ‘It’s your idea, run with it’ approach from kindergarten on.”

For Emig, the project is a “great example of how we can reclaim underutilized space to connect our students and our community.”