The sixth-grade boys prevailed in overtime against a tough team from St. Patricks (Armonk). In regulation, there was some very nice ball movement, some aggressive defense, and sweet shooting. Ryan Van Tassell canned a three and a couple of other buckets. Dylan Rucker drained several shots from the elbow. Evan Giachinta was a force in the paint, grabbing a bevy of rebounds in traffic, converting baskets and displaying a sweet passing touch for a big man.

Things were looking good, as Milo Shuk sank several buckets, but then Shuk took a hard spill and had to be helped off the floor, limping with what looked like a bad ankle sprain. As Shuk iced his ankle on the bench, St. Pats clawed back and finally tied the game with an old school three-point play, converted by their top player, in the final minute of regulation.

As overtime started, the fans wondered if the momentum had shifted. In OT, St. Pats continued to press full court. When St. Pats was shooting a free throw the sixth-grade Coach Tommy called out “Evan” and made a hand gesture for him to go long. Van Tassel, a quarterback in football, fired a bomb of an inbounds pass over the top of the fierce man-to-man pressure. Giachinta caught the pass and dribbled toward the basket. Drawing a defender. He dished to Shuk, who drained a short jumper. Lead Loretto.

Coupled with a 28-7 victory on Saturday over Sacred Heart (Paterson), and we’d have to say it was a pretty good weekend for the sixth-grade boys, who go into the Christmas break with a 4-1 record, eyeing a possible play-off birth. 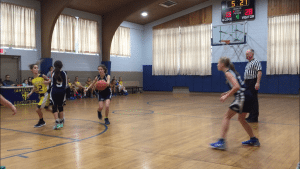 Noula O’Reilley drives to the basket against Immaculate Conception (Irvington) for the seventh-grade girls. Chloe Rowe is at right. (Photo provided)

The sixth-grade girls were down 13-10 to Saint John and Saint Mary (Katonah) at the half. SJSM was shredding the press.

“Why don’t we do the box-and-one thing on the girl scoring the points?” said forward Emily Tomann.

An excellent suggestion. After that the Lady Knights, played a 2-2 zone defense, with fearless speed demons, Eloise Pearsall and Finola Kiter, taking turns shadowing the star player from SJSM. This defensive adjustment resulted in SJSM still getting some open shots, but not in places they were used to shooting from, as the flow of their offense was disrupted.

The Lady Knights also caught fire offensively in the third, scoring 13 points, including a bank shot by Elaine Llewellyn, a running lay-up by Eloise Pearsall; inside baskets by Maggie Gordineer and Amelia Kupper; a shot by Ruby Poses; and a three-pointer by Camilla McDaniel.

With a little under a minute left, SJSM made a basket to cut the Loretto lead to 24-21. After SJSM launched a three that didn’t miss by much, there was a timeout. In the huddle, Gordineer said, “Let’s cover number 14 man-to-man too; she’s the one shooting the threes.” So the Lady Knights went out with a triangle zone and the Pearsall and Kiter playing man-to-man on the main scoring threats. No basket. A 24-21 victory. The sixth-grade girls go into the Christmas break 2-2.

When the seventh-grade girls walked into the Immaculate Conception (Irvington) gym on Saturday, they were surprised to find a handful of girls who were over 5’8” and broad-shouldered. Eyebrows went up. But once the game started, it became apparent that what the Lady Knights were missing in size, they more than made up for in speed and skill. A full-court 2-2-1 press resulted in lots of turnovers. 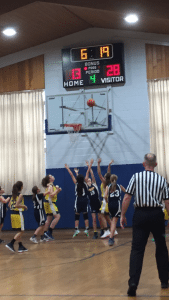 The seventh-grade team reaches for the ball against Immaculate Conception (Irvington).(Photo provided)

Moretta Pezzullo and Noula O’Reilly and Trinitae Alfred scored baskets in bunches, from inside and out. Chloe Rowe snatched passes on defense. Gianna Thompson and Mikayla Santos snatched rebounds. The lead ballooned to 15 points in the third quarter, which means no more pressing in CYO, so the aggressive Knight defense pulled back. (If you have a 15-point lead in CYO, you cannot press full court.)

Against the less pressurized defense, Irvington got a few baskets in the fourth quarter, but it was too little, too late. Loretto won, 30-22. On Sunday, the Lady Knights rode the back of Pezzullo on offense and tough collective pressure defense to beat Saint James (Carmel) 22-5. The seventh-grade girls go into the Christmas break 3-1.