Putnam County Sheriff-elect Robert L. Langley Jr., who will be sworn in Dec. 29, named the five captains who will make up his command team. 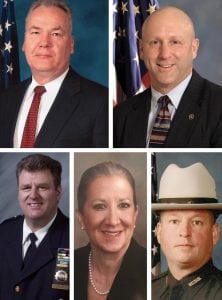 Jennings, who has been with the FBI for 22 years, has investigated homicide, drug trafficking, racketeering, money laundering and weapons trafficking. He was the lead case agent on a multi-year investigation of the Genovese crime family, resulting in prosecution of more than 100 defendants.

Swarm served for 24 years with the New York City Police Department, where he led a unit that rotated into high-crime areas. After being promoted to lieutenant of detectives, Swarm managed a team of 20 detectives. Swarm also served as a patrol supervisor.

From 1993 until 2016, Babcock served in the Putnam County Sheriff’s Department, where he was a field training officer and a member of the Marine Patrol and Emergency Response teams. In 2011 Babcock became a criminal investigator.