The Philipstown and Beacon tax collectors this week accepted early payments toward 2018 property tax bills following the passage of a federal law that will limit itemized deductions next year of local and state taxes to $10,000 annually. Making a payment on the 2018 bill before Dec. 31 will allow taxpayers who itemize to claim it as a deduction on their 2017 filings, although it’s not clear if the Internal Revenue Service will allow it.

Gov. Andrew Cuomo issued an executive order Dec. 22 calling on local authorities to issue tax warrants and deliver them to local tax collectors by midnight Dec. 28. With warrants in hand, tax collectors can accept early payments at their discretion. Philipstown sent its 2018 bills this week, with a due date of Jan. 31; Beacon sends out its bills in late January with a March 2 deadline.

Both tax collectors were accepting partial or full payments this week. Tina Merando, the tax collector and town clerk in Philipstown, also said she would delay the typical Friday noon closing today (Dec. 29) until 4 p.m. and add hours from 8 a.m. to noon on Saturday, Dec. 30, to accept payments.

In Westchester, County Executive Rob Astorino said on Dec. 26 that his administration would not be able to deliver a tax warrant by the end of the year. It is usually issued in March. “It is just not possible for the county to issue its 2018 tax warrants to localities within the next four days for a whole host of legal, operational and practical reasons,” said Ned McCormack, a senior advisor to Astorino, in a statement. In response, many Westchester towns are issuing their own warrants.

The Village of Cold Spring, which issues its tax bills on June 1, is not accepting early payments because it does not have a warrant from the mayor, which is typically not issued until the end of April after the adoption of the budget, said Village Clerk Jeff Vidakovich. “For all practical purposes, the governor’s order only impacts municipalities with a fiscal year beginning Jan. 1,” he said. The Village of Nelsonville, which is on the same fiscal year, also is not accepting early payments, said Village Clerk Pauline Minners.

School tax bills are usually sent in September; finance officials with the Garrison and Haldane school districts said they had no authority or method to take payments on 2018-19 bills until the school boards issue tax warrants in August. Officials at the Beacon district could not immediately be reached.

Where Tax Law May Hurt the Most
(Average House Price Decline) 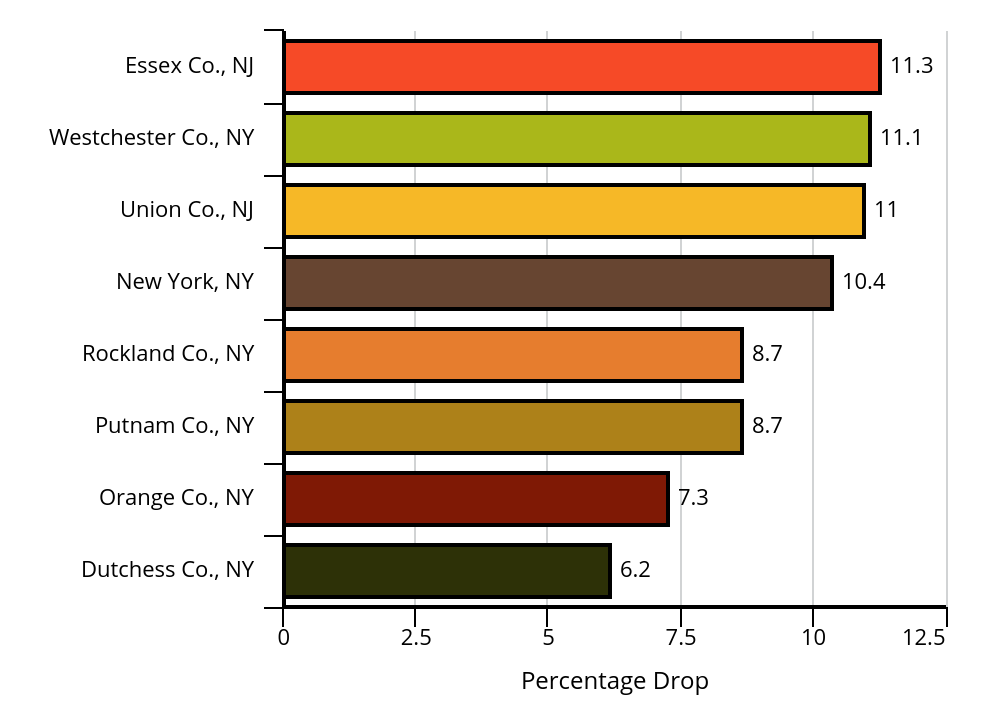 Percentage drop in select counties of average house values versus what they would be in the summer of 2019 without the new federal tax law, according to Moody’s Analytics. The firm attributed much of the decrease to limits on deductions of local and state taxes. Nationally, homes are expected to suffer a 3 percent to 4 percent hit.

The Philipstown Town Board met in a special session Dec. 26 and voted 3-0 (with two members absent) to authorize Merando to accept early payments on 2018 bills.

The Internal Revenue Service specifically disallows deducting state income and sales taxes except in the year owed but has not ruled on property taxes. While Cuomo insisted that early property tax payments are deductible in the year they are made, the New York State Association of Counties and the Office of the State Comptroller both cautioned the IRS could ultimately disallow early payments.

In an advisory issued Dec. 27, the IRS wrote that early payments will only be deductible if the assessment was also issued in 2017. But the advisory is not a legal ruling and the agency did say if “assessment” means that a tax bill has been generated, such as in Philipstown.

Payments do not need to be made in person. They may be mailed as long as they are postmarked by Dec. 31. The Beacon post office is open on Saturday, Dec. 30, until 1 p.m., and the Cold Spring and Garrison post offices are open until noon.

Online payments with a credit card can be made to Philipstown through midnight Dec. 31, although a 2.5 percent fee is added. Beacon does not accept online payments.

The governor’s Dec. 22 executive order was in response to a federal tax bill signed into law the same day by President Donald Trump. The limit on the deduction of local and state taxes will have a greater impact on California and states in the Northeast, including New York, where local and property taxes are higher.

According to an analysis by the Tax Foundation, the three counties with the highest median annual property tax bills are Nassau (Long Island), Rockland and Westchester, all of which are $10,000. The median in Putnam County, based on 2015 figures, is $8,631 and in Dutchess, $5,826. (By comparison, the median in large swaths of the country is $2,000 or less.)

The federal tax code revisions passed both the U.S. House and Senate largely along party lines, with no Democratic support. (Five House members from New York were among the 12 Republicans who voted against the bill.) Cuomo said that the property tax limit would raise federal taxes on New York residents by more than $14 billion.