From D.C. ‘swamp’ to Highlands ‘barnyard’

For at least three days a week Sean Patrick Maloney labors in the frenetic world of national politics, serving the Mid-Hudson Valley (including Philipstown and Beacon) in the U.S. House of Representatives. It’s a job with constant challenges for a moderate Democrat when Republicans dominate Congress and Donald Trump occupies the White House.

The rest of the time, Maloney retreats from Capitol Hill to a hill above Nelsonville, where he shares an estate, Lower Windwolde, with his spouse, Randy Florke; their teenage daughters, Essie and Daley (their adult son, Reiniel, lives and works in California); two dogs, and a number of pets who masquerade as farm animals. 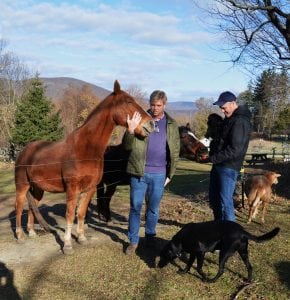 Located off Lane Gate Road, the 8-acre property includes a restored, century-old house, lawns and fields, a few outbuildings, and views of the Hudson River. There Maloney can trade his business suits and dress shoes for jeans and boots, and chat with Florke over breakfast as a puppy, Logan, cavorts at his feet.

Coming home to Lower Windwolde and its routine “is a normalizer” for Maloney, said Florke, who, with their daughters, handles most of the household and barnyard chores. 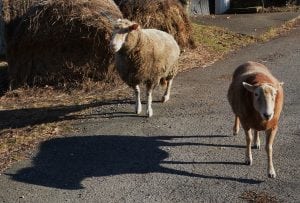 Though he often drags House work back with him, Maloney readily agreed. “A bad day in the barnyard is better than a good day in the ‘swamp,’ ” he quipped. “I’d rather be at home and deal with horseshit than in D.C. dealing with bullshit.”

The couple adopted the horses about 18 months ago after the pair were found eking out an undernourished existence in a garage along a highway. “You could see her ribs when we got her,” Maloney says of Arie, a thoroughbred-Arabian mix, who remains friendly and good-natured despite her daunting past. Male quarterhorse Poco is more skittish. “I don’t know if he was abused, or what,” Maloney said. 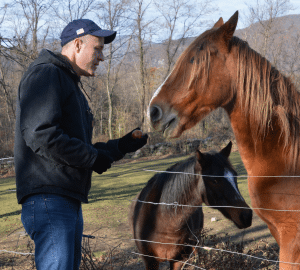 Once confined, Poco and Arie now enjoy ample food, care from doting humans, a cozy barn, and a field for kicking up their hooves. They like their surroundings so much they sometimes surreptitiously try to see more of Philipstown and visit neighbors. But “they only went to town once” — central Nelsonville — Maloney recalled. “That was an adventure!” Judy Meyer, a neighbor, “came running to tell us our horses were downtown.”

(Meyer recalls that, soon after alerting them, she spotted a Cold Spring squad car slowly escorting Randy as he walked the horses home.) 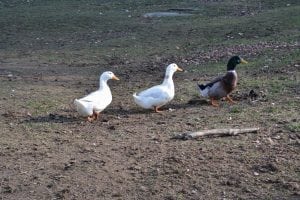 All the ducks, lined up in a row: A male mallard, right, and two domestic ducks form a family at Lower Windwolde. (Photo by L.S. Armstrong)

Along with the horses and puppy, Maloney and Florke have an adult dog, Bella; two sheep, Lilly and Nelly; and a male mallard who hangs out with two white farm ducks, a male and an egg-laying female, all so far unnamed. According to Florke, the critters can each expect treats or collars and leashes for Christmas.

In the House, Maloney belongs to the Animal Protection Caucus, whose 156 members span the political and geographic spectrum.

Maloney noted that Ted Yoho, a Republican from Florida, “is one of the most conservative members of the House. We agree on very little,” except the importance of “preventing cruelty to animals. He’s a former veterinarian and aware of some of the cruel things done to horses, in particular.” 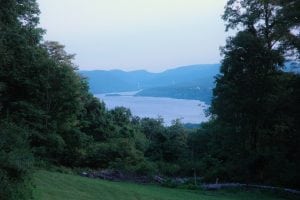 Haze hangs over the Hudson in a summer view from the lawn of Sean Patrick Maloney and Randy Florke. (Photo by L.S. Armstrong)

He and Yoho, joined by 269 other representatives, sponsored legislation (H.R. 1847), pending in committee, to ban “soring,” or the application of chemicals or sharp impediments to the feet of Tennessee Walking Horses and similar breeds to make movement painful, forcing them into a high-stepping gait.

A second caucus-backed bill (H.R. 2790) would prohibit testing of cosmetics on animals and a third (H.R. 1406) would forbid sale of cat and dog meat for human consumption.

Asked whether concern for animals and keeping pets helps those in power remain humble, Maloney looked toward Logan. “If you can’t have two teenage girls to keep you humble, a puppy is probably the next best thing,” he said.

He also noted, wryly: “You should know, the president does not have a pet!”