Dulce de leche (Spanish for “jam or sweet made of milk”) is a confection known, by one name or another, throughout most of the civilized world.

Whatever your point of entry, it’s a simple, almost primal preparation of caramelized, sweetened milk cooked low and slow. And although commercially available (Nestlé, Eagle), dulce de leche is incredibly easy to make at home.

Dulche de leche, in the can and as easy as pie. (Photo by J. Dizney)

To be sure, one could, if so inclined, fashion an artisanally correct version from the raw milk of grass-fed cows, sweetened with raw sugar, flavored Madagascar vanilla beans or Ceylon cinnamon. Online, you’ll find convoluted “improved” preparations — slow-cooker/crockpot instructions and others — but all that is needed is a large pot, water and a can of condensed milk and these short instructions:

The only caveat is to never allow the water level to drop below the top of the cans, or you risk an explosion and a nasty mess. 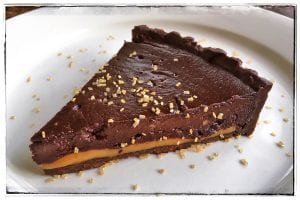 For this recipe, adapted from Chez Panisse pastry chef David Lebovitz’s My Paris Kitchen, I used a whole can, cooked three hours and reheated briefly in a bain-marie, then whisked slightly to even out the texture to make it spreadable. The combination of dulce de leche and bittersweet chocolate is properly indulgent for the holiday season.

Adapted from My Paris Kitchen; serves 10

With an electric mixer, beat the butter and powdered sugar in a medium-sized bowl on low speed until just smooth. Add egg yolk, scraping the sides of the bowl until it’s fully incorporated.

In another bowl, whisk together the flour and cocoa powder; add to the butter mixture, mixing just until a dough comes together. Form into a tight disk, wrap in plastic and let rest for 30 minutes at room temperature.

Using the heel of your hand, press dough evenly into a 9-inch tart pan (with removable bottom). Get the bottom as flat as possible and press the dough up the sides to the rim. Sprinkle salt over the dough, pressing it into the surface. Chill tart shell in freezer for 30 minutes.

Preheat oven to 400 degrees. Remove chilled tart pan and crust from freezer, tightly line inside of shell with aluminum foil and cover with pie weights or dried beans. Bake for 15 minutes in preheated oven. Remove foil and pie weights and bake for an additional five minutes. Remove tart from oven; decrease oven temperature to 300 degrees.

While the shell is baking, prepare the filling:

Warm dulce de leche in a Pyrex measuring cup placed in a gently simmering pot of water. Melt chocolate in a bowl set over a pan of simmering water; once it’s melted, remove bowl from the heat. Set a mesh strainer on top.

Whisk eggs in another bowl. Heat milk in a saucepan. Gradually whisk the warm milk into the eggs. Scrape mixture back into saucepan and cook on medium heat, stirring constantly, until steamy and slightly thickened (about 3 minutes). (If it separates, remove from the heat and whisk vigorously to bring back together.) Pour custard through the strainer into the chocolate; add vanilla and stir until smooth.

Assemble and bake the tart:

Bake tart in 300-degree oven for 20 minutes. Turn off oven heat and let tart cook in the oven for another 25 minutes in slowly cooling oven. Remove tart from the oven and cool further before serving. Serve with whipped cream, vanilla (or dulce de leche) ice cream or in its naked glory.