Music Together doesn’t require a lot of bells and whistles to engage the attention of some of the youngest ’uns, although bells are part of the proceedings of the early childhood music program offered twice a week in Nelsonville. 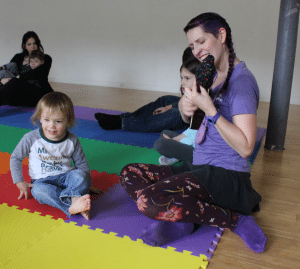 Alexia Tate (Photo by A. Rooney)

Founded in 1987, the national program was run in this area for quite a few years at the Desmond-Fish Library. Over the course of a 45-minute session, which includes call-and-response; rhythm instruments; shake, rattle and roll; circle activities, and free dance, children learn how to “speak music.” 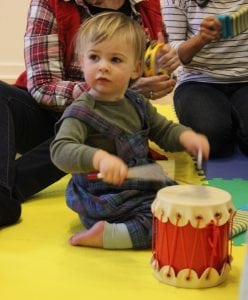 Holland, a current and future percussionist (Photo by A. Rooney)

The participants at a recent Saturday morning session at Create Community on Peekskill Road, led by Alexia Tate ranged in age from 9-month-old Jack, who watched as everyone got on their feet, to 7-year-old Fischer, who came along with her little brother, Snowden. Most were toddlers, accompanied by parents and/or grandparents.

Tate, who became familiar with the program when she took her son to a session in Queens (she now lives in Peekskill) comes from a background in children’s musical theater. She also founded Story Garden, a musical story time for young children. 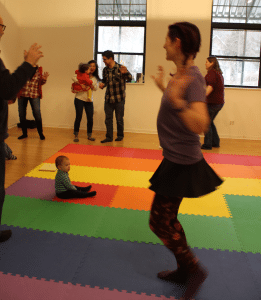 Jack, at nine months, is still figuring out how to stand up and dance. (Photo by A. Rooney)

Tate says she “fell in love with the philosophy of the class.” She completed training to become an instructor and, upon moving to the Hudson Valley, looked around for an area where there weren’t any classes. That was Philipstown. She now leads classes on Thursday at 10 a.m. and Saturday at 9:30 a.m. in 10-week sessions. The next series begins Jan. 11. (See musictogetherwithalexia.com or call 646-872-8147.) 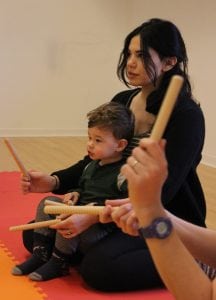 Harrison finds the beat with rhythm sticks (Photo by A. Rooney)

Next up were the rhythm sticks, singing in harmony, and a song with a parade of Australian animals, wombat to platypus. Along the way there was dancing and a circle activity, followed by serene cool-down time and, finally, the singing of “Goodbye, So Long, Farewell My Friend” (until the next week, that is).