The Beacon City Council on Dec. 18 adopted changes to the Fishkill Creek development zone that could limit residential building while encouraging commercial use in the corridor.

The major changes in the zone — which includes eight parcels, five of which have significant capacity — are:

The zoning also includes specific design standards for new construction, much of it based on historic and industrial features that have traditionally been used in the corridor. It retains the 25-foot minimum setback from Fishkill Creek for buildings.

Perhaps most significant is a clause in the law that does not “grandfather” in projects that have received Planning Board approval if they have not “substantially” begun construction. In the creekside zone, that ruling would apply to the 100-unit 248 Tioronda project, which received a special-use permit in 2014 but has yet to begin construction. 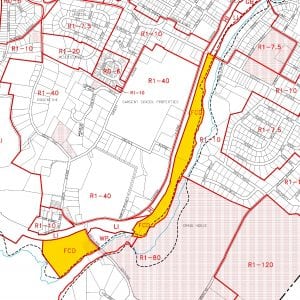 Any project that has not received “vested” rights — meaning the developer has already made significant improvements to the site — would have to comply with the zoning that exists at the time they apply for building permits, said City Attorney Nick Ward-Willis.

“When any municipality considers rezoning it always impacts projects that have received approval but have not yet proceeded,” he said. “Those new zoning laws get applied unless you provide grandfathering. It’s really a public policy decision that is left to the discretion of the council.”

The City Council will take up the discussion of zoning changes on and around Main Street after the New Year, when four of the six council seats will be held by newcomers Amber Grant, Jodi McCredo, Terry Nelson and John Rembert, who will be sworn in at 3 p.m. on Monday, Jan. 1. The council plans to hold an organizational meeting at 7 p.m. on Jan. 2.

The council also on Dec. 11 adopted the city’s 2018 budget, which includes a tax rate decrease for the second year in a row. Mayor Randy Casale cautioned, however, that residents’ bills may still increase as many of Beacon’s properties are worth more than they were a year ago.

The tax rate decrease applies to Beacon property taxes, not school district taxes, which voters are asked to approve each May.

The $20 million budget also includes the addition of a police officer, bringing the number of Beacon police on patrol to 29, while staying within the state-mandated tax cap.

Instituted in 2012, the tax cap requires school districts and local governments to raise the property tax levy (the total amount of money collected) each year by no more than 2 percent or the rate of inflation, whichever is less. The 2018 allowable increase is 1.84 percent.

Other budget highlights include:

The 2018 Dutchess County budget was adopted on Dec. 7 and includes a reduction in the county’s property tax levy for the fourth year in a row and a property tax rate cut for the third straight year.

Zoning Board of Appeals

The ZBA met on Dec. 19 to discuss the three variances requested for the Edgewater development near the Beacon train station.

As proposed, the 307-unit residential project would be spread among seven buildings and would encompass approximately 35 percent of a 12-acre parcel about a half-mile from the train station. It would also feature a 1-acre park and walking path to the station.

The variances requested for the project are:

Edgewater officials say they have requested the variances to maximize open space in the development. The project could proceed with a nine-building layout that would not require variances but would have a larger construction footprint.

The ZBA did not vote on the variances but each member indicated that they were inclined to approve the requests. The board is scheduled to meet Jan. 17.