Lindy Labriola, 22, of Garrison, who graduated from Haldane in 2013 and Amherst in 2017, is a Fulbright Scholar studying the effects of climate change in Bodø, Norway, inside the Arctic Circle. 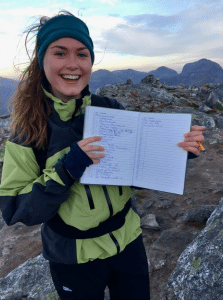 Lindy Labriola during a hike up a famous Bodø mountain, Heggmotind (Photo provided)

You studied English and geology at Amherst. Why geology?
It caught me by surprise, like shifting tectonic plates or swift Atlantic boundary currents. [Laughs.] My freshman advisor was a hydrochemist. She suggested I take oceanography, which was my first glimpse into the physical, chemical and biological connectedness of the Earth and its inhabitants. I meandered through the major’s offerings such as mineralogy, stratigraphy, paleontology and hydrogeology but eventually focused on climatology.

At this time of the year, it’s mostly dark in Bodø. Have you adjusted?

I take vitamin D to supplement for the lack of sunlight. I also use a light therapy lamp, because I noticed my hormones and natural processes — hunger, energy, emotion — began to flatline once the days shortened to fewer than three hours. Usually when I tell people I live in the Arctic, they respond, “That must be cold.” But Bodø butts up against the Gulf Stream, so the average winter temperature is about 30 degrees.

A sunrise in Bodø (Photo by Lindy Labriola)

You’ve studied the effects of climate change on reindeer herding. What did you find?

The indigenous population, the Sámi, is the only community here allowed to herd reindeer. Each year, they drive their reindeer across northern Scandinavia. Typically, the reindeer are able to break through the snow to reach the underbrush. But with climate change, there are mid-winter thaws and increased precipitation. So the snow melts and refreezes into layers that are difficult for the reindeer to penetrate. In addition, southern plant species are migrating north, so certain shrubs crowd out the reindeers’ food.

You will be in Norway for 10 months. What are your plans beyond that?

I’d like to pursue a PhD in climatology and bridge the divide between the social and natural sciences. Clearly there is a need to recognize the psychology and sociology behind climate-related behavioral change. What motivates communities to move away from vulnerable areas or to act more sustainably? It is imperative we grasp how to adapt, mitigate or transform our societies. I also want to continue work on a charity I co-founded, Inourhands.love. We put solar panels and other sustainable energy into disadvantaged communities.