Resolutions for the gardener

I’ve developed a relationship with a green space I drive by all the time. It’s a few acres of overgrown land with a stream. The back border is an abandoned rail line with mature trees. I stop at the traffic light and search the weeds and the banks for groundhogs. For years, I’ve been happily distracted watching them while cars speed by and no one pays them any attention.

Also known as whistle pigs or woodchucks, these members of the marmot family had found a parcel of paradise. Without nearby landscapes or gardens to disturb, they could live in peace as long as they stayed away from the traffic. 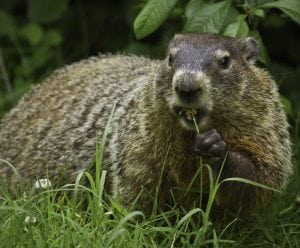 But this fall, the paradise was plowed. In a matter of weeks, all the trees were gone and the soil leveled. It’s now covered with gravel. All that remains of the stream is a narrow strip marked by a black plastic fence. There’s money to be made and stuff to be sold.

One thing I learned when I moved to the woods is that a bit of wild-looking land won’t last. I’ve watched on East Mountain as the clearing starts by the roadside, then a bulldozer appears and within a few weeks, dozens of trees are ripped out and the ground is leveled. A house is built.

I connected all this with a book I’m reading, Songbirds, Truffles and Wolves: An American Naturalist in Italy, by Gary Paul Nabhan, which documents his 200-mile walk from Florence to Assisi along the paths that St. Francis, patron of animals, ecology and merchants, walked and wrote about during his life.

Nabhan is searching for remnants of the wilderness St. Francis loved. His observations on changes in biodiversity and lost relationships between Italian peasants and their natural surroundings over hundreds of years make my lament for a few acres of groundhog paradise seem trivial. 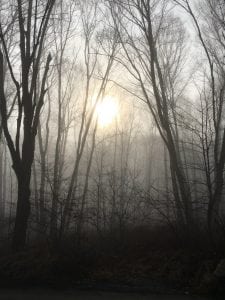 A view of the woods in misty morning light — instead of a razed woodlot, which is too depressing for a New Year’s column (Photo by P. Doan)

Yet when we lose perspective and respect for any living creatures, no matter how un-useful to our own purposes they may seem, we’ve lost reverence for any life, I think. The human suffering of Syrian or Rohingya refugees, the plight of species threatened with extinction — these are the scale of tragedies that make headlines and demand action, but even then the scale and complexity resists adequate humanitarian or conservation measures. What hope is there for a groundhog?

We keep plundering and developing. This end-of-year column is for the displaced groundhogs of Route 52 in Fishkill. I hope you made it out. I hope you found a new habitat and can live mostly undisturbed again.

In the meantime, I’ll keep working on my 9-acre patch on East Mountain, where I coexist with a groundhog I’ve written about previously. (Strategy: mow around patches of clover flowers as a tradeoff for the perennials it prefers. And bees also love clover.) This all may sound depressing, depending on your view of groundhogs, but I argue that it’s hopeful. At the end of the day, that’s what gardening is all about: Hope that a seed will sprout, a tomato will ripen, or a flower will bloom. Onward to a new year.