Four artists weave the past into art

Cloth and fabric, from clothing to coverings, have an intrinsic connection to memory, whether tactile, visual or something more ambiguous. Four Hudson Valley artists will examine that bond starting Jan. 7 in Cloth and Memory, an exhibit at the Howland Cultural Center in Beacon. 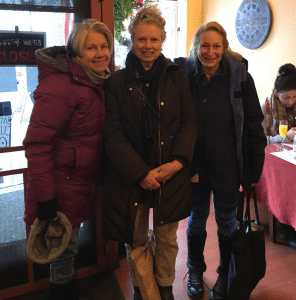 The four artists, who will investigate “how cloth retains, transmits and resonates,” are Mary McFerran of Croton (who also curated), Mimi Czajka Graminski of Red Hook, Riva Weinstein of Stanfordville and Harriet Cherry Cheney of Dobbs Ferry. Three of the four met in March as part of a 100-woman exhibition centered around suffrage and also held at the Howland Center.

McFerran, then living in England, made the connection between art and textiles while touring a Manchester museum repurposed from a textile factory.

“Cloth is a great medium to work in,” she says. “It’s so immediately available as part of our lives, an everyday skin. It’s also so much a part of women’s history — think of how girls were originally educated to sew, not read, and, over time, how many garment workers were and are women. It’s also pretty cheap, particularly if you use recycled, donated fabric.” 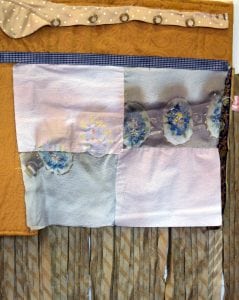 Things She Made, artwork by Mary McFerran (Photo provided)

She has always liked to sew — “It invites you to create time for yourself to sit down,” she says — but never thought of its potential for art until she realized it could replace glue. “The stitching connected with drawing,” she says. “I took an embroidery class, and people were using embroidery and stitching as art rather than as craft.”

McFerran’s great-grandmother was a glove stitcher and the connection between cloth and memory became clearer from genealogical work she undertook. She photographed or embellished family heirlooms with embroidery or by embedding them into compositions to create Ancestor Museum, part of the exhibit.

The works in Cloth and Memory, McFerran says, “intermingle sensory impressions, family lore and historical artifacts with expression in collage, installation, performance art and digital media. We all have clothing we remember, textures touched and felt. This digital era leads us to physical textures, seeking balance.”

Weinstein uses digital video as a “metaphoric cloth exploring the fragility and fleeting nature of life,” she says, often using everyday materials. Her installation at the show “seeks to create a contemplative space in which to consider loss, the cycles of life and the inevitability of change.”

Cheney works in fiber art, collage and mixed media assemblage, and her methods include photography, painting, sewing, stuffing, embroidery, weaving, beading and construction. She contributed a series based on her early memories of her Ukrainian Jewish grandparents, who lived next door to her family. 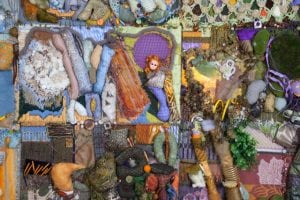 “My grandfather fixed machinery in factories but sewed the most lovely and delicate blankets for our doll carriages,” she recalls. “My grandmother would sit at night mending while we all watched television.”

Graminski will create a site-specific installation using textiles and text to explore memory, identity and relationship. Some of her textiles will be made by embedding dolls’ clothes into crocheted patterns. “I see my studio as a laboratory where I collect disparate specimens and manipulate and transform them, sometimes contrasting them with unlikely pairing,” she has written.

The Howland Cultural Center is located at 477 Main St. and is open Friday through Monday, 1 to 5 p.m. A reception planned for Saturday, Jan. 13, from 3 to 5 p.m. ties into Second Saturday. On Jan. 20, at 2 p.m., the four artists will participate in a panel discussion on memory and textiles in art, including a participatory performance.