Cassandra Saulter keeps retiring. No sooner has she thought, I’m done, when a message arrives asking, “Just once more? Please?”

The messages call her back to the soundstage, where she works in scenery, costume design and painting and makeup and hair. (She is a member of two unions.) Her most recent return from retirement was for The Greatest Showman, a big-screen musical about the life of P.T. Barnum starring Hugh Jackman, which opened in theaters on Dec. 20. 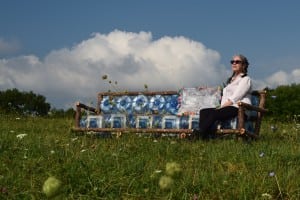 Cassandra Saulter sits on a couch she created with Ian Kingsley for a 2015 sculpture show at Saunders’ Farm in Garrison. (File photo by Michael Turton)

As part of the film’s makeup team, Saulter created the design for the body builder character, which involved devising a never-before-used tattoo suit. She also worked on designs for some of the background “oddities” characters.

The makeup team for The Greatest Showman was led by Nicki Ledermann, whom Saulter first worked with on the 2007 film Enchanted. “Back then we used Polaroids with notes in a giant binder,” Saulter recalls; today the planning is all digital. Ledermann assigned her to create two-dimensional art for the oddities and a design for the tattoo man. “I sent her many drawings,” she says. 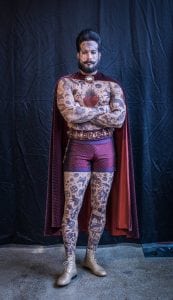 Born in Queens and raised in Westchester, where she attended Lakeland High School, Saulter is a third generation member of Local 829, the union for scenic artists, costume designers and painters. Her grandfather worked in the industry during the transition between silents and sound.

“The advent of sound affected art direction,” Saulter notes. Lakeland High School had “incredible and very encouraging” art instructors, she says, and during those years Saulter headed to the Garrison Art Center every Wednesday night to draw. After giving college a shot, Saulter decided to learn on the job. “I always wanted to be an artist in my own right, but I decided to come back home and learn from watching people — including my father — work,” she says.

She initially studied costume design and her first mentor (besides her father) was Ann Roth. She soon moved into scenic design, where she remained for 20 years before shifting to makeup and becoming a member of a second union, Local 798, for makeup artists and hair stylists.

When she became a scenic artist and joined its union in 1972, “there were basically no women working in the field,” she recalls. “That work in many ways is like having a job in construction. I was strong as heck and learned so much, from masters.”

The watershed moment was the filming of The Wiz, which was released in 1978. “They employed 80 scenic artists, and since everyone was put to work, it finally included women,” she says. “The union structure is wonderful, because the organization of it allows you to do your stuff and do it well.” 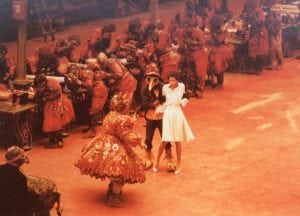 Once filming of The Greatest Showman began, Saulter was assigned to keep close tabs on about 22 performers whose makeup she had designed. “I don’t really like being on the set anymore,” Saulter says, “but as soon as I heard about this movie, I really wanted to be there, because it was such a creative job.”

Saulter has lived in Philipstown on and off for decades. In the 1970s “a bunch of us sort of moved here — it was so different then — and I tried to open up a studio called River Academy, a school for dance, music and art, classical guitar, ballet, jazz, martial arts. It was located in the old Bijou Theater on Main Street. It only lasted a season; Cold Spring just wasn’t ready for it yet.”

She moved to New York City, but returned briefly a few times, “doing furniture painting, selling knitted hats and my own paintings. I was here in the 1970s, ’80s, ’90s and then, finally, when I ‘retired,’ ” she says.

A Few of Saulter’s Credits

Saulter spent 1981 to 1985 living in a town near Turin, Italy, with a boyfriend, “painting, making stuff. I was in heaven,” she says. “It was another benefit of the life I was leading, overall, because jobs end, and between jobs you can be free with your life.”

With less time on sets, Saulter is spending more time in her Nelsonville studio, which is filled with the stuff dreams are made of: a couch made from water jugs, chandeliers concocted with parts unknown and a 6-foot sculpture of a woman she calls Delphine. 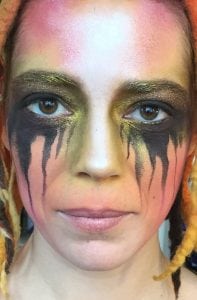 Saulter’s latest venture is repurposing discarded furs for a business she calls Flipping Fur, which began when she was asked to turn a mink coat into a blanket. Although she is an animal lover, she says that “sentimental objects can be repurposed and used. I didn’t kill the animal. I feel I’m honoring the spirit of the dead animal by not having it sitting in a corner in a heap.”

She also is hatching plans for a design and teaching center that “artists, architects, farmers — anyone whose principal goal is sustainability — can gravitate to,” she says. “I’d like to have a permanent installation of art made from repurposed materials and show people how to make things in ways they haven’t thought of. I’m a prolific creative person, not a business person. I love it when my day involves making a design idea into a reality.”

4 thoughts on “The Woman in Charge of the Tattoo Suit”