Debate likely to continue well into 2018

If 2018 is anything like 2017, the No. 1 topic of conversation in Beacon — from City Hall to coffee shops and street corners — will be the pace and scale of development.

With around 550 residential units under construction, 100 approved but not yet built and another 400-plus being reviewed, the conversation is far from over. But what else can be said after the issue has packed City Council and Planning and Zoning board meetings for months?

Once a thriving industrial river city, Beacon fell on hard times after its factories closed in the 1960s and ’70s. By the early 1990s much of Main Street was deserted, with first-floor apartments, not merchants, in many cases occupying buildings.

Last year, with a number of developments in construction and others under review by the Planning Board, a group of residents formed the People’s Committee on Development and began attending city meetings en masse. In September, the City Council adopted a six-month development moratorium because of concerns about Beacon’s long-term water supply.

The results of studies to find new water sources and to determine the maximum population that the city’s water can sustain are expected in the next month.

Dutchess County has created “Centers and Greenspaces” guidelines for several of its municipalities, including Beacon, that suggest where development can be supported by existing infrastructure while retaining agricultural and other open spaces.

In Beacon, the guide is largely in agreement with the city’s comprehensive plan, identifying the east and west ends of Main Street as development centers, with the waterfront and the train station-to-Main Street linkage zone as an emerging center. 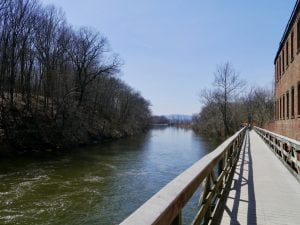 Zoning changes have been adopted in the Fishkill Creek corridor. (Photo by J. Simms)

“Any city goes through a process of understanding what it wants to be, and the comprehensive plan is meant to be the guide that the community relies on for implementing how it will develop,” said Eoin Wrafter, the county’s planning commissioner.

He notes, however, that even with a comprehensive plan — Beacon’s current plan was drafted in 2007 and revised in 2017 — external factors can be unpredictable. For example, high rents and the accessibility afforded by Metro-North led many Brooklynites to relocate to Beacon in the last decade.

Fifteen years earlier, the Taconic State Parkway was the impetus for similar growth spurts in East Fishkill, Lagrange and Beekman, he said.

“The community has to evaluate the pace and the type of development while looking at changing patterns,” Wrafter said. “Then it has to look to its zoning to implement that.”

To that end, Wrafter says that Beacon is on the right path. The City Council began discussing zoning adjustments in the Fishkill Creek district and along Main Street almost immediately after adopting the moratorium last fall.

Density-reducing changes were approved along Fishkill Creek at the end of 2017 and the council is set to continue the Main Street discussion this month.

But what’s not happening in Beacon, says Dan Aymar-Blair, one of the organizers of the People’s Committee on Development, is a more fundamental shift.

“People want to see a significant change in the culture of development,” Aymar-Blair said. “It should be ‘How can development support a community?’ and not just ‘How many units should there be?’ ” 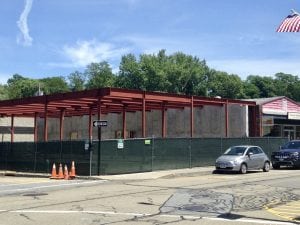 He agrees that development should go where infrastructure can support it, but with a better mix of uses, rather than hundreds of new apartments.

“People want to work here, and it’s a smarter formula for taxes,” he said.

“A lot of towns are going for an approach where land uses are clustered around transportation access, and there are unique businesses that people can walk to,” he said. But as these communities experience growing pains they often “worry that they’re losing a bit of their soul, and when they see new development happen it can trigger a natural response of, ‘I don’t like this change.’ ”

Hutchinson pointed to Frederick, Maryland, a city with a population of 70,000 that is within driving distance of Baltimore and Washington. Like Beacon, it has also become an attractive destination for people priced out of the surrounding metropolitan areas who want “ ‘authentic,’ and not strip malls.”

Hutchinson suggested there are a number of ways that a city like Beacon can smartly manage its growth.

A variety of transportation options, like bikeways and public transportation, will allow more people to live in and visit a city that maintains its character without the cost of expanding roads or parking. A standardized and simple review process will guide builders toward “easy and predictable” development plans, he said.

Hutchinson also suggested that city leaders perform a parking audit, so they know how much parking their streets can accommodate and they can plan ahead for overflow situations.

Finally, an active small- business association will help get local merchants on the same page with marketing and events. “That will make a downtown lively and productive and will help create the core vitality that’s needed to help an area survive,” he said.

Many residents cite affordability as an issue in Beacon, as well.

In 2017, the City Council increased the overall number of “affordable” housing units that developers must include in projects in Beacon, and on Dec. 29 the state Homes and Community Renewal agency announced $4.5 million in funding for the West End Lofts project adjacent to City Hall. 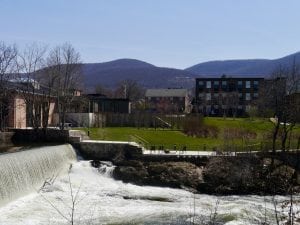 The Roundhouse complex is one of several redeveloped industrial sites in Beacon. (Photo by J. Simms)

Approved by the Planning Board in September, the Lofts will include 73 units of middle-income and artists’ spaces within walking distance of Main Street and the train station. Developer Ken Kearney calls the development “a good fit for Beacon’s current synergy.”

“This will address some of the concerns you’ve heard in the last year,” he said, “because there are a lot of people who were being priced out of the market but weren’t eligible for some of the other units that have income restrictions.”

Kearney, who began his development career in Beacon in the early 1990s, said he’s seen a number of communities live through growing pains while others simply stopped growth. “A community has to continue to evolve and grow,” he said. “How you balance it is the question.”

Beacon Building Inspector Tim Dexter says activity has slowed considerably in his department since the moratorium was adopted.

Meanwhile, developers have speculated that the building freeze, combined with zoning changes — the Fishkill Creek rezoning does not include a grandfather clause for approved developments that have not significantly progressed — will scare investors away from the city.

At the Jan. 2 City Council meeting, Lee Kyriacou, who holds an at-large seat, suggested that the council move quickly to continue the discussion of zoning on Main Street. Speaking a day later, Beacon Mayor Randy Casale said that the council is listening to the public.

“We’re listening, but that doesn’t mean we’re going to just roll over and stop all development,” he said. “I never believe everybody is going to be happy, but I believe we’re on the right track. When it’s said and done, whatever is done by the City Council will be for the best for our city.”

One thought on “Development in Beacon: What Next?”