Fountain Square will shutter in February

The bench in front of 104 Main St. in Cold Spring is one of the things Walt Carmichael says he will miss most when he locks the door at Fountain Square Antiques for the last time next month.

“Sitting out on that bench in the summertime was a lot of fun,” he says. “I made a lot of friends.”

Carmichael and his daughter, Jeanine, have worked the antiques trade together for more than 20 years. He says they will continue to do so after he closes the store during the third week of February, but only at shows. “Until then there are plenty of bargains!” he says.

The business got its name from its original location on Fountain Square, a plaza on East Main Street in his native Beacon that had a fountain once used to water horses. He moved the shop to Cold Spring 23 years ago; the shop’s current location is its third in the village. 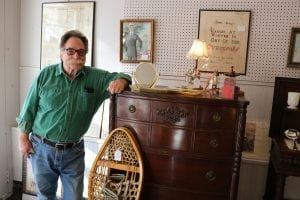 Carmichael says he never viewed the antiques business as his livelihood. “It was just something I enjoyed” that grew out of his passion for knife collecting, he says. His “real jobs” included 18 years in construction and 19 as a corrections officer.

The business changed over the decades, primarily because younger people seem to have less interest. “If I see a dumpster at an estate sale, that’s where I look now,” he says. “These days younger people don’t care about antiques — they just trash it.”

That waning interest has made selling antiques more challenging, he says, with some pieces dropping in value 75 percent over the past 20 years, including Wedgewood, English China that dates back to the 1600s, and Waterford and Lalique crystal. Enthusiasm for hand tools, old bottles, postcards and colorful Depression-era glass has also declined, he says.

Then there was the 2008 recession. “We took a 60 percent drop in business,” Carmichael says.

But Carmichael still revels in a great find such as “a beautiful, 1860s English Empire dresser made of solid tiger maple” that he came across a few months ago. A customer returned three times to the shop before buying it, a common occurrence with “serious buys,” he says. Another buyer, a couple from Brooklyn, also returned three times before buying a 9-foot-tall, 1880s pier mirror.

One of his most prized finds was also one of the smallest: a 2-inch tall, carved ivory bust of a female slave that he found at a tag sale in Beacon. It sold within hours. “You have to be observant,” he says. 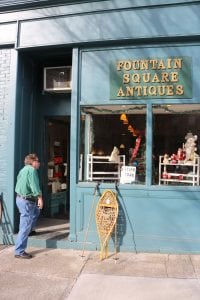 The public also has become more observant thanks to television shows such as Antiques Roadshow, although Carmichael advises keeping those “finds” in perspective.

“Only the best of the best gets on Antiques Roadshow and it gives people the impression that everything is worth a lot of money,” he said. He believes another popular show, American Pickers, is staged. “Nobody just rides here and there and finds a beautiful barn full of antiques,” he says. “Once in a lifetime maybe, but every week?”

“When I grew up in Beacon, Cold Spring was a pretty closed little town,” he recalls. Like many communities, the village declined in the 1960s and early 1970s with the growth of plazas and shopping centers. Eventually there were 30 to 35 shops in Cold Spring that brought thousands of customers to Main Street. “There were weekends when you couldn’t see the sidewalk for people, and they were here just for antiques,” he says.