In a charity fundraiser to fight a disease some players and their families know well, the Haldane boys’ varsity basketball team will hit the court against Yonkers Montessori Academy on Friday, Jan. 19, to support Riding on Insulin, an organization that supports research into Type 1 Diabetes (T1D), or juvenile diabetes.

Two Haldane players, Liam Irwin and Anthony Sinchi, have the disease, as does Irwin’s father, Bill. Cassie Kubik, the sister of another player, Alex Kubik, is also managing the illness, which, according to the Juvenile Diabetes Research Foundation, affects 200,000 Americans under age 20, along with more than 1 million adults.

The Haldane game, which begins at the school gym at 6 p.m., is free but donations will be accepted and there will a raffle and auction. The concession will also offer low-carb, low-sugar snacks. 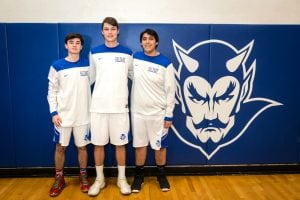 Amy Kubik, Krissy Irwin and Susan Richardson, who worked with varsity Coach Joe Virgadamo to organize the fundraiser, want to educate people about the disease and the toll managing it takes on children and their families.

“Most of the time when people ask me about T1D, they are not educated and think it’s caused by eating too much sugar,” says Krissy Irwin. “That can be very upsetting to a parent and child. Liam’s pancreas was attacked by a virus, leaving it not functioning and not producing the insulin his body needed.”

Her husband, Bill, “has had T1D for 37 years and gives him pointers on playing competitive sports with T1D,” she says. “Increased blood-sugar testing and eating the right things before and after practices and games is a key to better managing high and low blood sugars. Being good in math is always a plus for a diabetic as they have to manage insulin-to-carb ratios and correction factors to get their blood sugar back to the agreed-upon target as per their endocrinologist. It’s certainly not easy for a teenager, but with the family support it makes it easier, for sure.”

While there is likely a genetic component, people of all ethnic backgrounds have T1D, though the incidence generally increases in populations north of the equator. Many are diagnosed in early elementary school or as preteens, around growth spurts or hormonal changes.

There is nothing anyone can do to prevent T1D and, despite recent advances, no cure. People with T1D continuously balance insulin intake with eating, exercise and other activities. They measure blood-sugar levels multiple times each day in blood drawn through a finger prick or by wearing a continuous glucose monitor.

The illness affects the entire family, says Amy Kubik. “As a family, you all have to change the way you operate in all aspects. For our family, it became a new normal, with ‘Mommy has to stop and pay close attention to your sister,’ day in, day out; it was arduous.”

What stands out for Kubik is how “invisible it is for these kids. They do all that their peers do, while carrying this burden, which isn’t noticeable. And it’s different for each family living with this: What kind of insurance coverage do you have? Is it a one-parent or two-parent family? Are there siblings at home? What are the economics of the household?”

For Krissy Irwin, “we are all in this fight together. When Liam was diagnosed at the age of 13, it was our worst nightmare. But on the positive side — if you could say there is one — this actually was comforting to Liam because he was aware of how a person lives with it as he watched his father deal with it over the years and understood that you can live with diabetes. 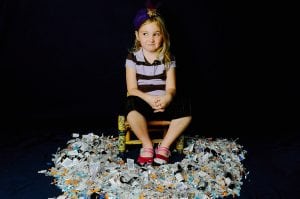 Cassie Kubik, in a photo taken when she was 4 years old, is surrounded by a year’s supply of her diabetes medication and equipment. (Photo by Juan Delgado)

“There is a constant struggle with T1D; you have good days and bad days and have to educate yourself on how many carbs are in the foods you are eating so you can give yourself the proper dose of insulin to cover that,” she says. “Family support is very important; it’s a life-or-death matter.”

The Kubiks had no clue that diabetes would afflict them; there was no family history of the disease or other signs. When Cassie, at age 3, seemed listless, it was believed she had a virus. “She didn’t want to go to her dance class, which was unusual,” Amy Kubik says. “It was a Friday and the doctor could have easily said, ‘See you Monday.’ Thankfully, he didn’t; if we had waited the weekend, she would have died.”

En route to the hospital, Kubik called her aunt, who is a nurse. “I told her, ‘Her blood sugar is 1,200. Is that bad?’ My aunt paused and said: ‘Yeah, honey, it’s real bad.’ Luckily for us, we found out early; it’s crucial to know in the first few days.”

Insulin is provided to the body through injections or a pump, which has to be worn at all times. It correlates to a computer program that provides a constant measure of blood-sugar levels. If there is a problem, an alarm sounds. For Kubik, a recent switch to the pump means she no longer must wake up each night at 3 a.m. to check on her daughter.

“Blood sugar has to be checked before you eat and when you don’t feel well, or if you’re getting a bug,” Kubik says, but “you can eat whatever you want. You just have to manage it well and get medication to match what you’re eating.”

This can be difficult for teenagers. “Most suffer some kind of burnout at times,” Kubik says, “and this is what you’re most fearful of as a parent. Hopefully by the time they leave for college they have the maturity to handle it all.”

She praises Haldane’s support of kids with diabetes, calling it “kind and professional, which isn’t always the case. Our kids need access at any time to a pile of stuff — their blood sugar can crash at any time. At Haldane we’ve never had to fight for anything.”